Bringing Kennedy Airport Into the 21st Century. Again.
THURSDAY, FEBRUARY 7, 2019 -- More than a dozen years after his tenure as mayor of New York ended in 1973, John V. Lindsay slid an illustration across his desk and insisted it was the future of the city's crumbling, overcrowded airports. "This will bring Kennedy into the 21st-century," Lindsay, by then a lawyer and lobbyist, told me in 1986. "And this will happen. New York needs and deserves this."

The plan, colorful squiggles of new road and rail links emanating from a purpose-built central check-in facility, would cost $1 billion and be ready in as few as five years. The idea: A single edifice handling all of Kennedy's passenger and baggage check-ins would be a fast, comparatively cheap way to extend the life of JFK's archaic, disjointed, free-standing terminals.

It never happened. Despite the support of the Port Authority of New York and New Jersey, the agency that runs New York's airports, it was never even officially announced. The drawings and plans--even Lindsay himself--were quietly tucked away and instantly forgotten.

In the 30-plus years since Lindsay showed me the "future," lots of things have happened at JFK, some good and some not. Billions have been spent, some wisely and some squandered. Airline players have changed: Pan Am, TWA, Northwest and Eastern are gone. JetBlue Airways, launched in 2000, and post-merger Delta Air Lines control two-thirds of the traffic now. Several terminals have been razed and replaced and the TWA Flight Center is being recycled as a hotel. Access roads were tweaked and a rail system--odd, truncated and jury-rigged--was built to stitch together otherwise isolated terminals.

But as any traveler who uses it even occasionally knows, JFK remains a bedraggled mess. Thirty-three years on, the airlines and the bloated, bureaucratic Port Authority still scramble for answers and struggle to keep up with growth, which reached 461,000 flights and 61 million flyers in 2018. Almost 20 years into the 21st century, Kennedy Airport resembles nothing more than a scarred and battered relic of the mid-20th century. 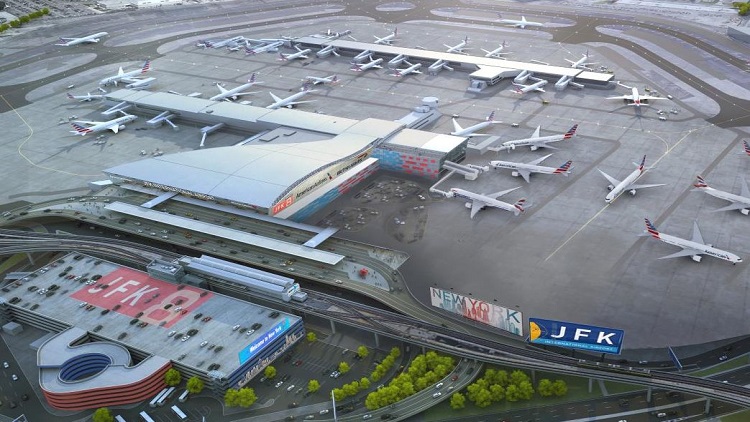 Hence yesterday's announcement that British Airways is abandoning Terminal 7 and moving into Terminal 8, home of American Airlines, its code-share, joint-venture and Oneworld Alliance partner. The $344 million deal won't happen quickly, of course. BA says it isn't leaving its rundown home until 2022, guaranteeing four more years of pain for BA's put-upon customers. And no one seems willing or able to explain how the move will be accomplished. They claim Terminal 8 will add five more gates and four more "hard stands," but those sketches are, well, sketchy. If I had to guess, the move will mean more long walks for flyers, more malfunctioning people movers and, most importantly, more cheek-by-jowl buses to more--and more remote--remote gates.

Also undetermined: The fate of the other carriers at Terminal 7. That includes Alaska Airlines, which handles more than 3 percent of JFK's traffic, and international players as diverse as Aerolineas Argentinas, Iberia, All Nippon Airways and LOT Polish. The expansion of Terminal 8--a paltry 70,000 square feet--won't accommodate them all.

All this huffing and puffing is part of a $13 billion fantasy introduced a few months ago by Andrew Cuomo, governor of New York and one of the powers behind the Port Authority, an unwieldy bi-state agency.

If I understand the bloviating about this iteration of a 21st-century JFK, there will be new anchor terminals at opposite ends of the airport. Four carriers--Lufthansa, Air France, Korean Air and Japan Airlines--will build and operate a new Terminal 1. It'll replace the existing Terminal 1 that those airlines opened in 1998. A new T1 will require the demolition of Terminal 2, opened in 1962 and currently used by Delta. Delta logically will move T2 operations to an expanded Terminal 4, where it runs most of its flights. At the other end of the airport, JetBlue will raze Terminal 7, which will be 52 years old by 2022. It will then erect a new building covering the area once occupied by T7 and parts of Terminal 6, torn down eight years ago.

Got that? The new JFK will have a Terminal 1, larger Terminals 4 and 8, JetBlue's Terminal 5 (opened a decade ago), a new terminal on the site of BA's building and that repurposed TWA hotel.

Numbers scramble aside, notice what's missing? Thirteen billion dollars of investment--it was announced as $7-$8 billion in airport work just 13 months ago--and no new runways. The old JFK, outmoded and overburdened when Lindsay flogged the 1986 renewal plan, had four runways. The current JFK has four runways. The "new" JFK, whatever it will be and whenever it is deemed complete, will have four runways. That doesn't exactly scream "planning for growth," does it?

Also nowhere to be seen: rational public transit. The JFK AirTrain dumps flyers at a remote commuter railroad station or distant New York City subway stops. For a town that lives and dies on public transportation, Kennedy is a slow, confusing, multi-seat ride to anywhere visitors probably need or want to go. New York hasn't had anything like a dedicated train from the city to the airport in a generation. The new JFK master plan is silent on the matter.

Cuomo, the energy and muscle behind this slapdash JFK blather, hasn't been a particularly good governor, but he fancies himself a modern-day Master Builder. He's had some successes: a new span over the Hudson River, marginal progress at LaGuardia Airport and several new stations on the New York subways. But his $150 billion infrastructure plan seems intent on building for building's sake. There's very little intermodal strategy, no overarching vision and virtually no attention paid to the needs of upstate New York.

And as with all things New York, Cuomo's infrastructure victories have been over budget, overwrought and accomplished at the expense of desperately needed day-to-day maintenance. To make matters worse, Cuomo and New York City mayor Bill de Blasio despise each other. They don't talk and seem to enjoy undercutting each other with their Democratic party bases. The toxic relationship doesn't fill you with confidence about JFK's future.

The bottom line: Expect nothing transformative in this JFK "transformation." It's the only wise approach when politicians announce plans to bring JFK into the 21st century. Kennedy probably won't be a 21st-century airport until sometime in the 22nd.