A Reminder: You Really Need to Know This Stuff ...
THURSDAY, FEBRUARY 28, 2019 -- The tsunami of news is now so intense that even the most punctilious business traveler misses stuff, forgets details, blows tactics or loses important material in inaccessible memory. In other words, forgive me for ducking new news today and taking one column to remind you of stuff you really, really, really need to remember on the road.

HOTEL DISCOUNTS ARE NOT IMMUTABLE
The lodging industry is comparatively transparent about pricing--well, transparent compared to airlines. Hotel Web sites always have boxes to tick or radio buttons to click so you can apply AAA discounts, senior bargains and AARP deals. In recent decades, the hierarchy was relatively immutable. Hotels offered AAA discounts that were slightly better than AARP and senior discounts, which were essentially the same. In fact, as the automotive quality of AAA service declined, the only reason to pay for AAA membership was the extensive package of hotel discounts. But this has changed in the last year or two. AAA discounts have been cut--at some chains it is down to as little as 5 percent--and AARP deals have been slightly improved. If your reflex is to hit the AAA box, think again. Click that AARP box, too, for a comparative price. And, by the way, you don't have to be a senior to join AARP. Officially, you can sign up at 50. Realistically, the same deals are available regardless of age if you sign up for their E-mail blasts.

INTRA-EUROPE BUSINESS CLASS STINKS
Nonstop flight options to Europe have increased dramatically in the last few years, but the chance of consistent bargains on transatlantic flights has shrunk nearly as quickly. That means flyers often buy a connecting itinerary--and that is when they get slapped in the face by intra-Europe business class. British Airways and Lufthansa, to pick two examples, offer just 30 inches of seat pitch intra-Europe. Air France, KLM, SAS and the others are very little better. Yes, the middle seat is kept empty, but even that "perk" is being cheapened. BA has removed the fold-down table in business class middle seats, which severely reduces the functionality of the space for the aisle and window passengers. What to do? Always fly the nonstop if it makes financial and logistical sense. When you do accept connections, always choose the itinerary that maximizes the flight time on the transatlantic leg and minimizes the intra-Europe segment.

BATH TUBS ARE NO LONGER A GIVEN IN HOTEL BATHROOMS 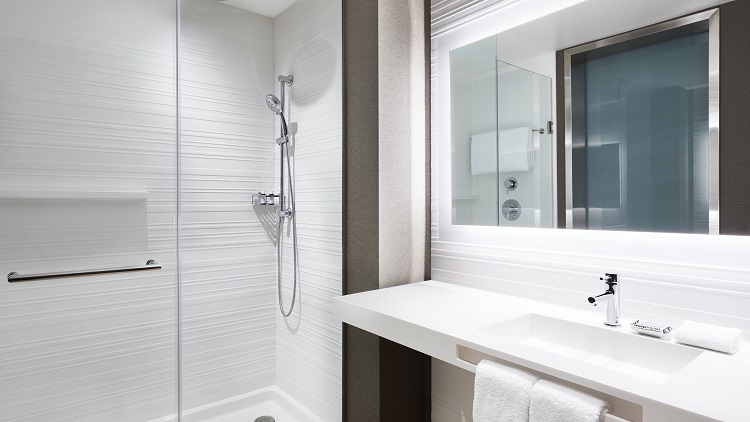 More than a decade ago I wrote a column called A Watery Grave for Hotel Tubs. In other words, hotel bathtubs were disappearing then. New-build properties now almost never have rooms with tubs and renovating properties usually rip out their tubs, too. (It's not just a matter of guest preference. Eliminating the traditional bath/shower combination allows developers to build smaller rooms and still promote the illusion of spacious accommodations.) Which is why I don't understand the E-mails I get from you folks when you get a room without a tub and you're shocked--shocked!--at the omission. Assume any guestroom you book will not have a tub. If you want or need one, call ahead to the hotel before booking and find out if any rooms are equipped. And, yeah, that includes you travelers who like to fill up the bathtub with ice and booze over a football weekend. By the way, the bathroom with walk-in shower pictured above is the standard issue at all newly built AC Hotels. AC is the full-service, mid-market chain that Marriott is rapidly developing on the bones of a Spanish hotel group it acquired a few years back.

RENDER UNTO THE BUREAUCRACY ...
Let me cut to the chase: Yes, when you get a new passport you must update your information on your Global Entry account. It's not automatic. If you don't update your passport information, you won't be able to use airport Global Entry kiosks when you reenter the country. Worse, you'll lose your automatic TSA PreCheck. No, you can no longer do this via GOES because the GOES system no longer exists. You must create a new account at Login.gov before you can update your passport details with Global Entry. No use arguing. Just do it their way and move on. Don't waste a second of psychic effort trying to figure out the whys and wherefores ...

KNOW THE MOBILITY JARGON
Getting older and need assistance in the form of a wheelchair to maneuver the increasingly long and winding roads from check-in to boarding gate? Need a temporary ride due to a health or fitness condition? Without delving into the convoluted politics of airport "pushers," allow me to alert you to linguistic reality. There are two separate categories of wheeled chairs. What we generically call "wheelchairs" can only move you around the airport. That's fine if you can walk from the aircraft boarding door, maneuver through the aisle(s) and get to your assigned seat. If you need a conveyance that will get you from the front door of the airport terminal right to your aircraft seat, you need what is called an "aisle chair." That's the only one narrow enough to navigate aircraft aisles. Know what you need (and can justify) when you call the airline. If you need an aisle chair, be sure to specify it. And remember: There is no blanket rule about wheel or aisle chairs at the TSA checkpoint. It is an infuriatingly local call. Some TSA checkpoint agents will pat you down while you are seated in the chair. Some will require you to stand, however. Be prepared for both.

A CHIP OFF THE U.S. CREDIT CARD BLOCK
Virtually all U.S.-issued credit and debit cards now have an embedded chip. (If you still have a card that doesn't, call your bank and join us in the 21st century, won't you?) But the U.S. still clings to the chip-and-signature approach while the world has long adopted the chip-and-PIN method. When you are overseas, proactively alert your restaurant server, grocery-store clerk or whomever that you are using a signature card. They'll have to push a special button on their card reader to generate a receipt for signature. (The rest of the planet simply enters a PIN number and no signature is required.) And beware: U.S. issued chip cards will not be accepted by automated, unmanned kiosks. That means you'll need cash to buy public-transit tickets, pay for parking or gasoline or even make a purchase from a vending machine. Of course, all this won't matter soon when we pay for everything via a phone app. In the meantime, consider this admittedly brief list of U.S.-issued chip-and-pin cards