The Forks in the Road of Global Airline Safety
THURSDAY, MARCH 21, 2019 -- The house I live in sits at the fork of a country road linking a famed day hike with a commuter railroad station and the train to Manhattan. When I'm in residence and the weather is fine, I watch streams of day-trippers, eyes glued to their phones and Google Maps, take the wrong fork and follow the least-scenic, least-convenient route to the station.

I mention this little bit of my life off the road because it is the perfect metaphor for where we are with the Boeing 737MAX. We've reached a fork in the road of our understanding of airline safety, airline economics and global airline regulation. And we know pilots were following the wrong computerized path when the Lion Air and Ethiopian Airlines disasters killed more than 300 of our fellow passengers and led to the grounding of the 737MAX.

The current fusillade of media reports on the aircraft, the accidents and the politics and economics surrounding them are, to say the least, confusing. To say the most, the coverage has been a hot mess of inflammatory speculation, ill-informed punditry and pound-the-table rhetoric that bears very little relationship to life on the road as we live it.

So let me do my best to calmly and logically cut through the hype and the hoopla and explain why we've reached so many forks in so many roads.

WHY WE STILL FLY 737S
The Boeing 737 is the oldest technology most of us experience in today's skies. Virtually every plane produced before the first 737 went airborne for Lufthansa 51 years ago has gone out of commercial service. Originally designed for short hauls and with a lot of features borrowed from the Boeing 707 and 727, the plane has proven remarkably durable, quite flexible, incredibly popular with airlines and, if not loved by passengers, certainly not despised. As decades passed, Boeing and airlines collaborated to make the plane longer, heavier and with higher seat counts. The latest generation of Boeing 737s flies halfway across the Pacific to Hawaii and across the Atlantic to Europe. It is cost-effective. It is safe. It is a cash cow for both Boeing and the airlines.

MAXING OUT THE PLANE
At least 10,000 Boeing 737s have been produced and each generation has been stretched. The first-gen Boeing 737 carried just 124 passengers, only had a range of about 1,720 nautical miles and measured 93 feet long with a 93-foot wingspan. A 737-900 can carry more than 200, has a range of 3,200 nautical miles and is 138 feet long with a 117-foot wingspan. But then came a fork in the road. The traditional 737 couldn't be stretched any more. To expand the twin-engine, single-aisle fuselage again, Boeing had to create power plants so large that that they no longer fit under the wings, a 737 hallmark.

A LEADS TO B LEADS TO C
You'd logically conclude that if the engines no longer fit, Boeing had reached the end of the road and the planemaker would have to design a totally new aircraft. But what is logical isn't what is economical. Besides the massive cost of developing a from-scratch aircraft, all of the supporting mechanical and regulatory infrastructure would have to be created, too. Boeing didn't want that, the airlines probably wouldn't pay for it and regulators, primarily the U.S. Federal Aviation Administration, weren't prepared. So the 737 MAX series was born. The fuselage was stretched once again and the plane got heavier still. The massive engines that didn't fit under the wings? They were moved to a new position in front of the wings. This changed the 737's center of gravity and forced Boeing to create software (called MCAS) to automatically compensate for pilot error. 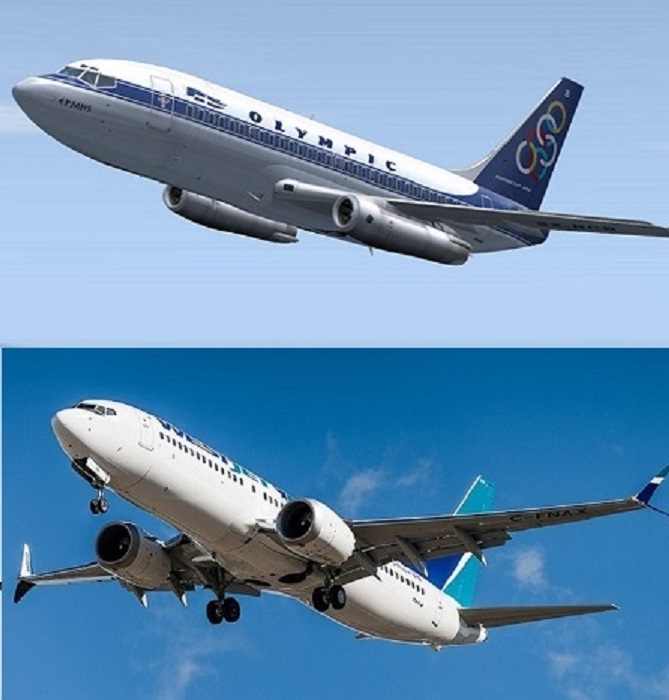 Like all pre-MAX models, Boeing 737-200s (top) had engines under the wings. But the 737MAX (above) required larger power plants, so Boeing moved them to the front of the wings. That changed the plane's center of gravity and required controversial new software.

UGLY REALITIES
Here is where several roads and several forks in those roads are involved. Boeing chose to soft-pedal the MCAS system and did not do a good job alerting airlines and pilots to the new software and how to use and override it. U.S. regulators didn't know about the software or didn't investigate it thoroughly enough. (And the FAA, without sufficient resources, has long inspected paperwork more frequently than aircraft.) Foreign countries for decades chose not to create robust inspection and regulatory regimes, preferring instead to rely on the FAA as a sort of global safety authority. For decades, fast-growing airlines in developing nations demanded more and more automated cockpits to offset potential errors that their young and inexperienced pilots might make. Boeing didn't include as standard two systems (a warning light and a monitor) that would have alerted pilots to decisions made by MCAS software. Those were sold only as optional equipment. Most airlines chose not to buy them. Every one of these strands was a choice that airlines, regulators and Boeing made. Every one was a fork in the metaphoric roads we've been traveling in commercial aviation.

CATASTROPHIES AND CHAOS
At this early stage of the investigation, it seems the Lion Air crash last year was the result of that airline choosing the wrong fork in every road. Its pilots did not know about MCAS and didn't know how to override it. Lion Air wouldn't pay to have more experienced pilots and didn't buy Boeing's optional warning systems. Its own maintenance was shoddy. And it ignored a huge omen: We learned this week the 737MAX8 that crashed on October 29 as Lion Air Flight 610 almost went down the day before, too. On October 28, an off-duty pilot riding in the cockpit jump seat recognized the problem, quickly adjusted the MCAS and saved the day. In the Ethiopian crash earlier this month, the 737MAX8 aircraft in question may have had an MCAS issue, too. The pilot, a 29-year-old, and the first officer, with only 200 hours of experience, apparently didn't know what was happening or how to remedy the problem.

US VERSUS THEM
The two U.S. airlines that operate the 737MAX8--American and Southwest--had taken precautions to override any potential errors created by MCAS software. American's MAX aircraft are equipped with both of Boeing's optional warning systems. Southwest's MAX aircraft had one--and the second was installed after the Lion Air crash. That's why the FAA didn't rush to ground the aircraft and why the pilots unions of both Southwest and American vouched for its safety. (Worth noting: Both the AA and Southwest pilots were unhappy last year after the Lion Air crash because they hadn't been told by Boeing about the MCAS system.)

THE NEXT FORKS IN THE ROAD
Got questions? You should. This global issue has exposed the choices--some of them bad--that the airlines, the regulators and Boeing make. But some things to ponder as we work to live our lives on the road:
+ Don't listen to "experts" who tell you that it'll be "weeks" before the MAX aircraft are back in the sky. It'll be months. We may not see these planes in the U.S. skies until well into the fall.
+ Boeing will have to answer for its apparent reluctance to disclose the MCAS system. It will certainly be required to include the two warning indicators as standard equipment and do more to make the software better, more transparent and more reliable. With nearly 5,000 MAX planes on its order books, the plane is key to its future. It has no other plane to offer airlines looking for a multi-tasking smaller aircraft.
+ The FAA will surely endure all sorts of criticism and attacks. Much will be justified. And a lot of it will be sophistry from politicians who've never appropriated enough funds to make the agency a truly independent force capable of riding herd on gigantic private companies like the airlines and Boeing.
+ Foreign nations must decide whether they should continue to farm out their regulatory duties to the FAA. And they will have to decide whether to allow their flag carriers to continue to hire children, give them cursory training and then call them fully qualified pilots.

We business travelers have to accept this reality: Safety isn't guaranteed and it is not absolute. There are so many forks in the road and too many chances to choose the wrong direction. And there are far too many companies and people willing to assume automated systems are infallible replacements for well-trained, independent-thinking human beings.

I won't have any trouble with that last part. All I have to do is look out the window of my office and watch the day-trippers mindlessly obeying the GPS on their phones and taking the wrong fork in the road.