Why We Fly Where We Fly and How We Fly The Way We Do
THURSDAY, MARCH 28, 2019 -- The daily rush of travel requires physical and emotional blinders. To get through, you put your head down, plow ahead, pay no attention and do what you have to do.

The problem with such dogged determination to get from Point A to Point B and survive another day? We miss many of the tectonic shifts that alter the balance of our lives on the road.

So here's what I want you to do today: Stop. Breathe. Don't obsess about the next flight or the next upgrade or whether you got that acquisition bonus from your newest credit card. Today, let's look at the big picture and see which of the 800-pound gorillas of the skies are flying us where. 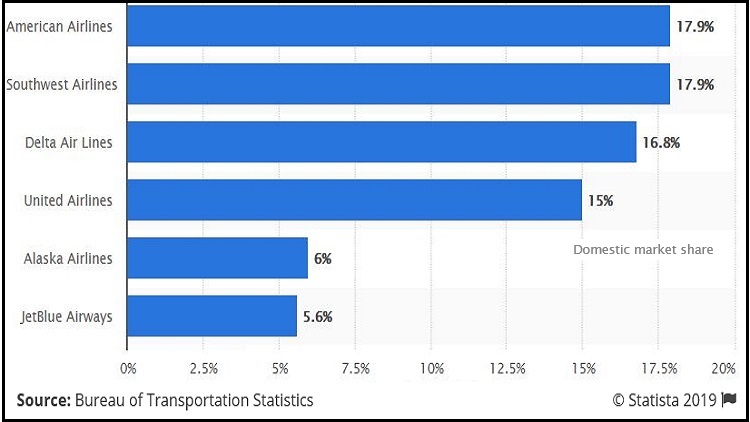 HELLO, GOODBYE
Southwest Airlines' rise to the top of the charts--well, at least the chart explaining which airline carries the most domestic passengers--is not a fluke. Whether by accident of opportunity or management design, Southwest dominates in most any city another carrier abandoned as a hub. Remember when US Airways had a Pittsburgh hub? It closed the 600-flight-a-day nexus and now Southwest rules the roost with around 28 percent of the traffic. St. Louis? The old TWA hub eventually dismantled by American now relies on Southwest for 62 percent of its traffic. When United demoted Cleveland as a hub several years ago, Southwest moved in and now is the Number 1 carrier, with almost 18 percent of the market. We need not even talk about airports left for dead by the entire airline industry: Dallas/Love, Chicago/Midway, Houston/Hobby. Those are all Southwest fortresses now.

BRAVE SIR ROBIN RUNS AWAY
Doug Parker, who runs American Airlines, is famous for two things: Ludicrous statements about his finances--he recently claimed American would never lose money again--and Brave Sir Robin-level cowardice in the face of competition. When he ran US Airways, for instance, the airline's network was 98 percent focused on hubs, thus eliminating most competition. He swapped extensive holdings at then-competitive New York/LaGuardia Airport for many fewer assets at less-competitive Washington/National and essentially stopped fighting Southwest at his hometown hub in Phoenix. He's following the same script--when challenged, run away--at American. He has focused growth at two fortress hubs--Philadelphia and Charlotte--while shrinking to near irrelevance at New York/Kennedy. It is now a distant third behind Delta and JetBlue. It has all but ceded the battle of Chicago/O'Hare to United Airlines even after getting a clutch of new gates. And for all the noise it makes about winning the battle for Los Angeles, American's LAX market share today is smaller than the combined share American and US Airways commanded when they merged late in 2013.

DULLES BY DEFAULT
One of Brave Sir Robin's former acolytes, Scott Kirby, runs United Airlines these days. He doesn't like competing, either, but he's also convinced United isn't getting its "natural share" of flyers. So the question is where to expand. He decries a previous management's decision to abandon New York/Kennedy, but won't restore service there. After dominating LAX for years, he is cutting back at Los Angeles, slipping to fourth place with just 15 percent market share. So besides two legacy hubs (pre-merger United's San Francisco and pre-merger Continental's Houston/Intercontinental), United is looking at a perennial underachiever: Washington/Dulles. United once threatened to shut Dulles, but now it's building furiously. It grew its capacity nearly 6 percent at IAD in 2018 and expects a similar increase this year. The catalyst: a 36 percent reduction in the cost of passenger enplanements since 2014. But all the Dulles growth isn't organic. Now that it's cheaper to operate at Dulles than Newark, United has been shifting connecting flights away from its New York-area hub. So if you're wondering why your flights to places like Ithaca, New York, or Chattanooga, Tennessee, now connect through Dulles and not Newark, thank the taxpayers of Virginia. They underwrote a grant that allowed Dulles to lower its operating cost for United.

BATTLE FOR YOUR BUSINESS
Good, old-fashioned air wars no longer exist since there are so few carriers and thus little incentive for them to upset the competitive balance. But there are some airports where competitive advantage is a sometimes thing. In Boston, it looked as if JetBlue had locked up the market after chasing off disinterested United and American. JetBlue's nearly 32 percent market share remains impressive, but Delta smells opportunity in New England and has been throwing assets at Boston. It now has 14 percent of the market. Los Angeles remains a tempting target that no one can control. Delta and Alaska Airlines continue to battle in the burgeoning Seattle-Tacoma market. Hometown hero Alaska Airlines even launched flights at Paine Field this month in an attempt to reach North Seattle flyers before they even reach Sea-Tac.

THE NEW BATTLEGROUNDS
Airline traffic follows demographic patterns so all the rust-belt hubs of yore will eventually be replaced by Sunbelt hubs. To that end, Delta has already designated Raleigh-Durham a "focus city," the industry rubric for a place where there are a lot of nonstop flights. It's eyeing Austin, too, a lucrative, expanding flight market. (Never underestimate Delta's determination and appetite for growth. Its swift ascendancy in the uber-expensive New York market is proof. Once a fringe player, Delta and its commuter vassals now control nearly 40 percent of JFK's traffic and 32 percent of the LaGuardia market.) Fast-growing San Antonio will get a look eventually as well. Watch Nashville, where Amazon.com retreated after New York City decided it could live without giving Jeff Bezos, the richest man in the world, billions in tax breaks. (Ironically, the old American Air was ahead of its time: In the 1990s, it once tried to build hubs in Nashville and Raleigh-Durham simultaneously. Too much, too soon, however.) And if it wasn't for the notoriously difficult aeronautics of San Diego Airport, some carrier surely would have built a hub there. For the moment, though, Southwest rules San Diego with 39 percent of the market, more than Delta, United and American combined.