No Food, No Flights, No
Hyatts and No Breakfast
THURSDAY, MAY 30, 2019 -- You want food? The travel industry doesn't want you to have it for free. You want hotels? Don't go to Canada to find a bunch of hypothetical Hyatts. You want flights? Well, do not try flying via Via Air.

What does all this stuff have in common? Well, um, actually, nothing. But it's all travel news worth noting and you need read on to find out more. The money you save is surely your own.

AMEX SAYS NO AIRPORT FOOD FOR YOU
When I first started traveling for business in the 1980s, American Express was the plastic coin of the realm. Diners Club was fading fast and neither Visa nor Mastercard were yet serious contenders for our T&E spending. Not anymore, of course. Using just our own small sample--the cards you use to pay for JoeSentMe.com membership--Amex and Visa are now neck and neck. In April, for example, more of you used Visa to pay for membership fees than Amex. It was ever-so-slightly flipped in March. 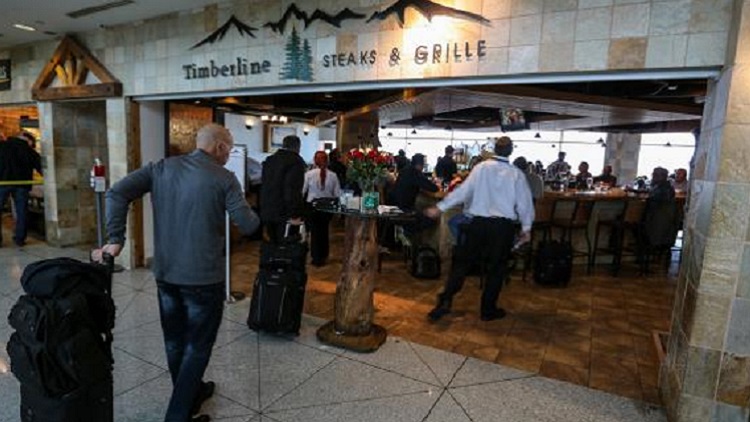 I mention this because I am always stunned when Amex cuts a benefit while jacking up annual fees. It doesn't have the market clout to impose its will on business travelers like the old days. Yet once again American Express is slashing, this time cutting a Priority Pass benefit on Amex cards bundled with PP membership. Effective August 1, Amex Priority Pass cardholders will not receive the restaurant credit, a perk Priority Pass has expanded rapidly in recent years. That means Amex cardholders will be out of luck looking for an Amex-aligned perk at key airports such as Denver, where the $28 credit at the Timberline Grille subbed for lounge access; Terminal 8 at New York/JFK, where Bobby Van's Steakhouse was a lounge substitute; and terminals at LAX and SFO and concourses at Boston/Logan. At least at the moment, Chase and Citi say their Priority Pass arrangements will not change. Travelers with Priority Pass cards issued by those banks will continue to be able to use them at participating airport restaurants.

When Amex does something stupid like this--and it is clearly a financial decision despite American Express' lame claim about wanting to offer cardholders a "genuine" lounge experience--I wonder about the continuing value of its flagship, the Platinum Card. Its daunting annual fee, now $550, is still offset by a wide array of useful perks: the best airport lounge access in the field; a $200 annual airline-fee credit; mid-level elite status at Hilton and Marriott; five points per dollar spent on airline travel; and Uber statement credits. But Amex has also subtracted perks in recent years and makes the airline-fee and Uber credits more restrictive than they should be. And let's not even talk about the overcrowding at Amex's proprietary Centurion Lounges.

I've been on record for literally decades claiming Amex Platinum should be in the wallet of every serious business traveler. I'm not so sure anymore. I can see smart travelers making other choices.

HYATT TRIPLES DOWN ON A WEIRD CANADIAN LIE
Back in January, I flagged Hyatt's phony baloney Canadian expansion. Hyatt's response? Triple down on a lie. Earlier this month, it promised "to triple Canada brand presence by 2022." The problem with that claim? They made a "double presence" claim in a press release last June. Yet almost none of the hotels promised last year opened. In fact, most slid further back on the timeline in this month's press release. It's weird, despicable corporate doublespeak (pun intended) of the worst sort.

If we use the date of the 2018 press release (June 6) as a marker, Hyatt has no more hotels in Canada now than it did last June. Only one that was promised (a Hyatt Place near Calgary Airport) has opened. It also picked up a Thompson hotel in Toronto as part of its purchase of a management company. But two (a Hyatt Place in Edmonton and a Hyatt Regency in Montreal) have left the chain.

So one year into Hyatt's plan to double and triple its footprint in Canada, the net-net is zero.

VIA AIR DISAPPEARS WITHOUT A SCHEDULED TRACE
Via Air seems to have thrown in the towel. Never heard of the small carrier based in Maitland, Florida? I refer you to the news earlier this month that Via never showed up to launch flights from the new airport in downtown Mobile, Alabama. The ghosting of Mobile was just the tip of the metaphoric iceberg. With no advance notice in recent days, Via has dropped all scheduled flights on the rest of its route map and cancelled previously announced new service. When you can roust Via management, they claim flights were dumped due to a pilot shortage. But that seems to be a dodge to cover financial problems. Since Via also operates charters, some routes--Orlando/Sanford to Jackson, Mississippi, for one--may run sporadically. Avoid at all costs.

BREAKFAST IS THE MOST EXPENSIVE MEAL OF THE DAY
You've probably never heard of Diamondrock Hospitality, either. But it owns many Marriott-branded hotels, including the JW Marriott in Denver's Cherry Creek neighborhood; Marriott branches in Vail, Chicago and Salt Lake City; Westin outposts in Boston, San Diego, Washington and Fort Lauderdale; and assorted Courtyard, Sheraton and Renaissance properties. In other words, Marriott is a lot more likely to listen to what Diamondrock says before it listens to us peon business travelers.

And what is Diamondrock saying? It doesn't like giving free breakfasts to elite Marriott Bonvoy members.

"We have been a little bit focused on" the fact that Marriott gives elites "free breakfast at resorts," he told analysts. "They [Marriott] compensate us, I think, $7 a breakfast." That's not enough, Brugger explained, and he wants Marriott to pay him more or otherwise reduce its breakfast outlay. "We're working with them on solutions."

In other words: Get ready for fewer benefits from Bonvoy. Maybe not today. Maybe not tomorrow. But, soon, and for the rest of our lives.