The Little Things
We Do Together
THURSDAY, AUGUST 1, 2019 -- InterContinental Hotels on Tuesday announced that it will banish personal-size bathroom amenities and replace them worldwide with bulk products bolted to the walls. That promptly set off a rhetorical battle between those who find environmental heroism in eliminating single-use plastic bottles and those appalled by the idea of unsanitary and possibly unsafe common-use amenities.

Why do we need hotel chains stocking rooms with what are most often indifferent and murkily sourced personal care items? In 2019, virtually all women travelers I know carry their own products. Most male travelers I know are agnostic or, if they do care, carry specific potions, too.

We don't need little hotel bottles adding to the plastic pollution of the planet. And we surely don't need big, honking, common-use bottles exposing us to germs or twisted fools who'd dump mysterious and harmful chemicals in a communal container.

Carry your own--which you probably already do. Banish baby-size bottles. Stamp out common-use containers. Time for this stupid, counterproductive argument to end. A pox on both their hotel rooms.

Now that I've positioned myself as Mercutio--as Cole Porter says, brush up your Shakespeare--and swiped a headline from Sondheim, let us descend from theatrical Olympus and figure this out before your next hotel stay in Athens, Greece, or Athens, Georgia.

Exactly when hotels began stocking their bathrooms with more than just a bar of soap is lost to time, but the practice of offering fancifully named shampoos, conditioners and body washes and lotions was in full swing by the 1980s. Hyatt, then an upstart hotelier, was seen as the instigator of what became known as the Amenities War. 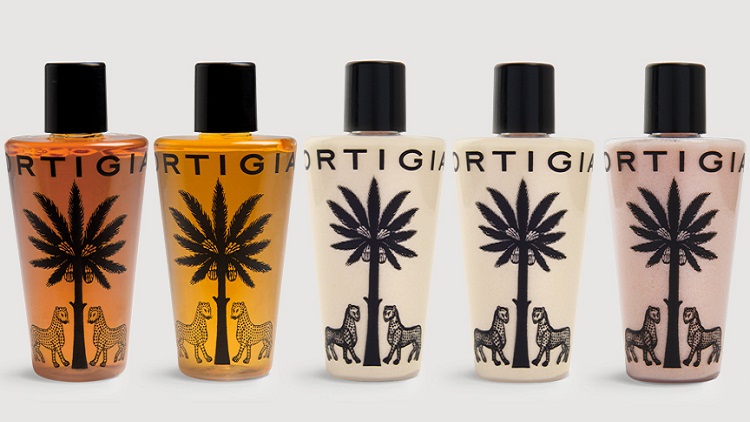 As years passed, hotel chains fiddled with the product, the presentation and even the bottles and tubes. Outfits like Gilcrest & Soames--British-sounding, Indiana-based and owned by a kitchen-supplies firm--popped up to sell fake fancy formulations. On the other hand, genuine articles from small producers such as Ortigia (left) and C.O. Bigelow arrived in eye-catching packaging.

The Amenities War might have ended if not for the TSA liquids ban, first launched 13 years ago this month and constantly amended in the early days. The rules were initially so restrictive and amorphous that even the most fastidious business traveler left their lotions and potions home and lodging chains briefly offered a spread of designer brands and launched some personal-shopping services.

But as we've adjusted to the 3-1-1 rule, hotel chains have been rethinking their investment in bathroom amenities. The expense has lately outweighed the "halo effect" chains may have generated for stocking any particular amenity. With the rise of social media, up-and-coming personal-products makers, those most likely to try for hotel placement, decided courting "influencers" was more effective than funding lodging deals.

And then there's that pesky environmental thing. Hotel mini-bottles may not be as polluting as single-use bags, as dangerous as six-pack rings or as easy to target as straws, but they add to the global plastics glut. It's bad environmental policy to keep using them and, sooner rather than later, single-use bottles will surely be banned.

So wrapping itself in the environment, InterContinental this week announced its mini-bottle ban. It can claim to be the first major global chain to "go green." Read the self-serving statement for yourself. But also know the truth: InterContinental is slashing costs. Its environmental commitment is as small as the miniature shampoo bottles it pledges to eliminate by 2021.

The problem, of course, is IHC's planned replacement: common-use squeeze or pump bottles bolted to bathroom and shower-stall walls. 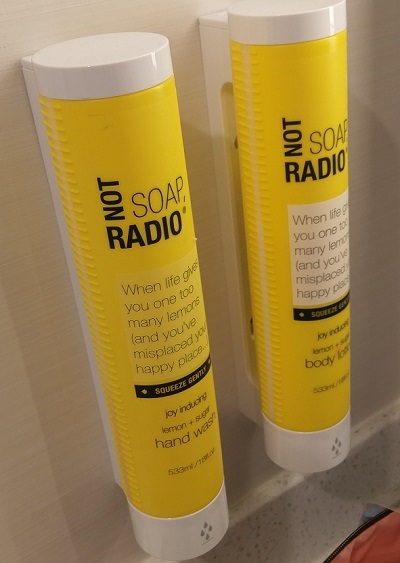 In a word: Ick. In more words: Communal bottles in hotel bathrooms are a terrible idea. Some, like the stupid squeeze bottles (left) deployed by Tru, Hilton's new budget chain, are nearly impossible to use. All are breeding grounds for germs. There's always the chance that housekeeping may not have refilled the bottles. Worst of all, some wall-mounted designs are easily doctored, an opportunity for nut jobs to do us harm by introducing all sorts of liquefied horrors.

I can muster no defense for common-use bathroom amenities in hotel rooms. Their biggest benefit--bulk amenities are cheaper than individual bottles--will look pale indeed if guests are sickened by a germy container or a madman sabotages the bottles. And I question the ecological advantage of big plastic bottles over individual mini-bottles.

The win-win-win solution is for hotels to eliminate bathroom amenities and for us to carry our own. The earth wins, hotel chains win and we win.

I don't expect hotels to pass any cost savings on to us, of course. But it might slow the rise of nightly rates. And the environment will surely benefit.

Ending "free" in-room hotel amenities also offers real opportunities for lodging chains. Lower priced and mid-scale chains could bulk up the quality and quantity of amenities offered for sale in their grab-and-go kiosks. That means more profit. Upscale chains could expand programs like Hyatt Has It, which offers emergency supplies to guests. Luxury hotels and resorts could burnish their reputation with an innovation like "personal choice" schemes. They'd offer to stock your room with branded amenities of your choice on request. Both plans would cost less than even bulk bathroom amenities and be better environmentally.

As for us, c'mon. Let's be real. Do you depend on a hotel's mini-bottles? Some of us probably do. But as I said, most women and some men already tote their own supplies as a matter of personal choice. Would you really miss hotel-supplied amenities?

That said, it never hurts to think again about how we accomplish these little things.

You can purchase reusable, TSA-compliant bottles for less than $8 a pack on Amazon.com. The range of options is fantastic. I've been using reusable bottles for years. Fill 'em up with your personal choices and forget the hotel stuff in bottles big or small.

Don't want to fill your own bottles with your own products? Okay, lots of travel-size versions of what you use are available for sale at Minimus.biz. Big-box stores like Target and Walmart sell travel-size products, too. So do many supermarkets.

Don't even want to shop? A new service called GetWynston will do customized shopping for you and deliver products directly to your hotel. The service isn't cheap--retail price plus a delivery charge--or particularly fast--it needs seven days--and isn't necessarily environmentally friendly. But it's been filling orders since January and could plug a business travel niche.

And convenience and personal choice do seem like the bottom line. Mini-bottles of hotel amenities are costly and environmentally problematic. Common-use amenities are dirty and possibly dangerous. The best solution, it seems to me, is to carry our own and use what we want to use without interference from hotels.