My Long and Winding
Road With Rock and Roll
THURSDAY, JANUARY 2, 2020 -- I've listened to a lot of rock and/or roll over the years. But when I digitized my music last year, I realized how few rock albums really mattered to me.

These albums rarely fall out of my listening rotation, however. I've owned almost all of them in multiple formats and carried them with me for much of my adult life. These are the ones that mattered then and matter to me now. And, probably, will matter forever, for as long as forever may be for me.

CAROLE KING IS NEVER SO FAR AWAY
James Taylor released Sweet Baby James in 1970 and it had major contributions from Carole King, then primarily known as half of the Goffin-King writing team that penned many 1960s girl-group hits. King offered Tapestry a year later and the era of the singer-songwriter began in earnest. In the intervening generation, Taylor remained central to American pop music, but King all but disappeared. After several more important albums, none of which were quite as brilliant or sold as briskly as the earthy, sensuous Tapestry, the Brooklyn-born King moved to Idaho and recorded and toured only sporadically. She really didn't re-emerge until about 15 years ago with some smallish, but well-received, concert tours. By 2010, 40 years after Sweet Baby James, she reunited with Taylor for a gig at The Troubadour, the Los Angeles nightclub where they launched Taylor's iconic album. That led to a Taylor-King national stadium tour, a best-selling live album and a concert video that's a PBS pledge-season staple. Then came Beautiful, the smash Broadway musical about her life up to Tapestry. It ran six years. Then came her Kennedy Centers Honors in 2015 featuring Aretha Franklin's electrifying performance of "Natural Woman." Yet Tapestry overshadows everything in King's otherwise beautiful life. It stayed on the charts for 20 years, spawned a track-for-track tribute disc and continues to influence generations of musicians. The songs--including "It's Too Late," "Smackwater Jack," and "I Feel the Earth Move"--are classics. I can't be objective about this, of course. Tapestry has been on my lost-on-a-desert-island-with-five-albums list since its release. And if there's a more poignant song about life on the road than "So Far Away" I have yet to hear it. After all, how many of us have adopted King's mantra--"I sure hope the road don't come to own me"--as our own?

THE ALBUM IN THE BUBBLE OF BRILLIANCE
Once you get over a shock--Graceland is 34 years old--enjoy it anew for what it is: An inspired moment that fused Paul Simon's rock and pop sensibility with Ladysmith Black Mambazo's Zulu rhythms and stirring harmonies. It's long past time to reintroduce yourself to "The Boy in the Bubble," where Simon reminds you that "every generation throws a hero up the pop chart." Or "Graceland," where he sticks an elbow in your gut by explaining that "Losing love is like a window in your heart/Everybody sees you're blown apart/Everybody sees the wind blow." This isn't for listening when the Coronavirus crisis leaves you craving comfort. This is for when you need energy and a reaffirmation that everything will be okay.

A LONG TIME GONE--AND THEN BACK AGAIN 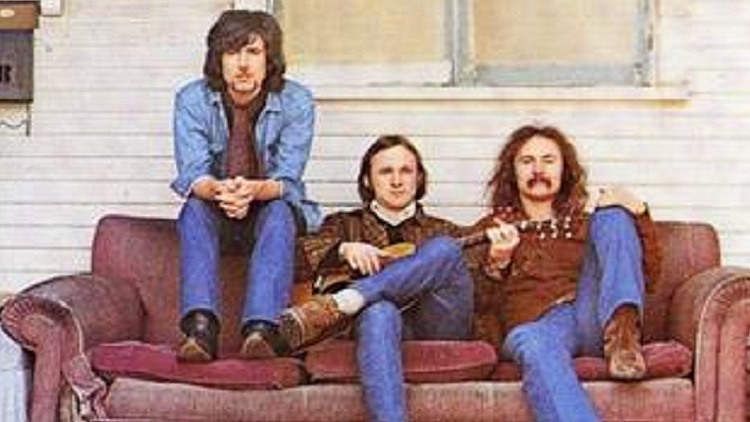 The tough times drive us back to our personal "comfort music" and that must explain why I've been listening to Crosby, Stills & Nash again. From the first moment that they were released in 1969, all ten songs became part of the background sound of an era. Over the years, I've worn out five or six copies of the vinyl album and a few more copies of the cassette. And do you know what? The digitally remastered CD version of Crosby, Stills & Nash holds up. "Wooden Ships" is still a great fantasy. "Marrakesh Express" is still fun, even without cheap Liebfraumilch and bad weed. But, for me, it has always been "You Don't Have to Cry." The words made sense then: "Are you thinkin' of telephones and managers and where you got to be at noon? In the long run it will make you cry. Make you crazy and old before your time." Now, when every flight, every business trip and every headline really does make me feel old and the hotels and midnight coaches overwhelm me, I'm relieved to know there's a copy of CS&N in my carry-on.

OLD FRIENDS, OLD MUSIC, STILL RELEVANT
As a matter of fact, the Simon & Garfunkel 2003 Old Friends Tour was nothing more than an "oldies" concert mounted by a long-dead act to promote repackaged music that's more than a generation old. So how come the concerts, the act and even the repackaged music, a two-disc, 33-track compilation called The Essential Simon & Garfunkel, earned rapturous reviews? Because Simon & Garfunkel once meant something to American music and, as we learn over and over, the duo still matters to America. Despite his angelic voice, Art Garfunkel's solo career never amounted to much. And Paul Simon's 1986 fusion masterpiece, Graceland, outshone anything else he's done in his storied career. Together, however, even when their 65-year friendship is strained and there's no new music to sing, Simon & Garfunkel represent a quintessential form of American folk-rock. They are always beautiful to listen to and Paul Simon's writing remains timeless. How else to explain the 2017 Volkswagen spots using "America" to such heart-wrenching effect? Or the band Disturbed's disturbing 2016 reimagining of "The Sound of Silence," which has 100 million YouTube views? It's simply and factually wrong to say that Essential has old favorites from old friends. When you listen to it, the music somehow seems new all over again. And you need to have it in your carry-on when you go looking for America, especially in this election year.

I WON'T BE DENIED
I'd never presume to tell you which Neil Young album to love. His catalog is so vast, music so creative and career so long that every rock lover can find an eddy or current in which to get lost. Mine is Time Fades Away, the 1973 release after Young's breakout Harvest the year before. The album had enemies: The record company wanted another Harvest, but Young gave them this ragged, sonically dissonant album from a troubled live tour. Some fans did want another Harvest. And Young himself became one of the album's enemies. Unhappy with the sound and distressed by the unhappy tour that spawned it, he once called Time Fades Away the "worst" disc he ever made. He wouldn't even approve a CD release until 2017, so its fans spent years tracking down bootlegs and hoarding the scratched-up copies of the original vinyl. But I'll die on the hill of "Don't Be Denied," an unsentimental autobiographical song that I find myself singing at the strangest times. I love "Love in Mind," Young's most beautiful and unadorned love song. And despite Young's despair with the album, the other six cuts from Time Fades Away are frequently heard in his concerts. I haven't purchased many rock albums in recent years, but nothing gave me more pleasure than to buy my first CD of Time Fades Away 44 years after I bought my first of many vinyl copies.

THE LONG AND WINDING ROAD NOT TAKEN
You can't listen to Let It Be ... Naked, the stripped down, "as it was meant to be heard" version of the 1970 Beatles album, without thinking of what might have been, for them and for us. The original concept of Let It Be came from The Beatles' desire to get back to basics: a bunch of mates making and releasing live-on-tape, no-tricks music. In other words, they were on their way back home to their rock roots after changing popular music--and the world--with their politics, style, money, mysticism, drugs and dazzling studio work. They didn't make it: Let It Be was abandoned as the band pulled apart and only released after a very thick application of Phil Spector's studio chicanery. Come to think of it, neither did we. For better and for worse, the world that The Beatles helped shape in the 1960s has been fraught with times of trouble ever since. The whispered words of wisdom never come. A long, long time ago, The Beatles thought Let It Be...Naked was the long and winding road home. It's absurdly naive, of course, but I can't help thinking that we wouldn't have been left standing here if only they had gotten back to where they once belonged.