Honest: Amsterdam Is
More Than Schiphol
THURSDAY, JANUARY 30, 2020 -- On a raw and rainy January Saturday in Amsterdam--Is there any other kind of January day in Amsterdam?--I stood at the edge of the Albert Cuyp street market and watched a virtuoso at work.

The bearded fellow manning the Pietersma Snacks food truck effortlessly doled out a steady stream of paper cones full of fabulous fries, ladled huge dollops of a nearly endless range of toppings--and moved from language to language without missing a beat. 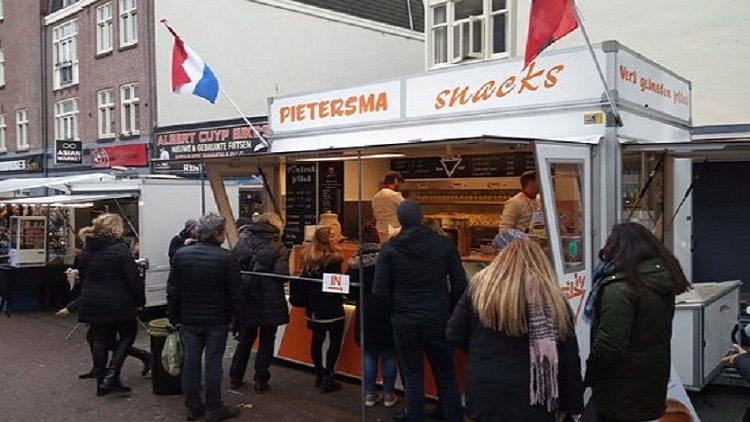 Locals came by to buy and he joked with them in Dutch. The French came and he spoke French. Germans came and he negotiated sales in German. All while talking to me in perfect English. Cone after cone of fries. Question after question from me. Wave after wave of mixed-language customers. Ketchup, mayo, peanut sauce, piccalilli. As the rain alternately poured down and spit in annoying little bursts, nothing stopped the flow of fries or the customers or the amazing torrent of perfect language.

The world, after all, comes to Pietersma for fries. And, of course, his answer to my obvious question--How are you fluent and effortlessly comfortable in so many languages?--was the answer you hear from most any Dutch person.

"Small country." Generous squirt of mayo from a huge urn on an order of fries. "We have to speak" ... a squirt of peanut sauce ... "other people's languages to do business" ... blizzard of chopped onions ... "and survive."

Business travelers generally don't pay much attention to Amsterdam. We fly into Schiphol Airport, do our connecting business in English without thinking twice about it, move on to the next flight. Maybe we never get into Amsterdam itself and that's our loss.

Amsterdam just works. All those canals. All those bicycles. All those tulips. All those fries. All of those giggly tourists looking to score some weed. All of those museums. Nothing seems to faze the city or its residents. They fly their triple-X city flags from trim, narrow townhouses and houseboats and live what seems to be happy and contented lives. Amsterdam is so nice, so pleasant, so effortlessly comfortable that you can fly into and out of Schiphol for years without heading into town--and it'll all be great the next time you do make time to spend a few nights between flights.

Which is why the current existential crisis--a weird echo of a long-ago bit of Seinfeld wordplay--seems so out of character.

Amsterdam is straining to handle the rapidly growing visitor trade and seems an early casualty of the dreaded, if ill-defined, first-world disease of "overtourism." The city hosted around 20 million visitors last year. That may double in the next decade. These are astonishing numbers for a city of fewer than a million people.

Rather than discourage tourism, however, the goal is to convince visitors to hit other parts of the Kingdom of the Netherlands. Oddly, though, the main effort seems to be an exercise in rebranding rather than genuine rethinking.

For decades, the Dutch government has promoted itself to the world as "Holland." In fact, Holland.com is "your official guide for visiting the Netherlands." The problem, though, is that Holland geographically and politically only covers the city of Amsterdam and two of the country's 12 provinces. So the Dutch now use Holland.com to promote almost every place in the Netherlands except Amsterdam. And on January 1, all official government communications and promotional material began using Netherlands rather than Holland.

Well, okay, if the Dutch think calling itself the Netherlands instead of Holland will ease the tourist traffic in Amsterdam, I guess they have done their homework. The Dutch always do their homework. But my friend at Pietersma Snacks didn't seem convinced.

"Tourism is good," he said while serving up three cones of fries to Chinese visitors speaking in halting English. "I like meeting people and finding out what they think is the 'best' topping for fries. I hope they keep coming."

GETTING THERE
Schiphol Airport isn't nearly as big--or flashy--as Singapore Changi, but it works better than any major airport in Europe. Walks are longer than they used to be, of course, and the airport has an annoying habit of calling their lounges by number rather than name. But it is efficient in the classic Dutch way and generally comfortable. There's also a fully integrated train station below the terminals. ... Taxis in Amsterdam are expensive and a cab ride into town from Schiphol will cost north of 50 euros. The better option is a 15-minute train ride to Amsterdam Centraal Station. It costs less than 5 euros. Then cab it to your final destination or use the convenient public transit system.

WHERE TO STAY
All major chains are well-represented in Amsterdam. I like the Hyatt Regency, located just out of the center in a residential neighborhood. Rooms are modern and spacious and many have lovely canal views. The Regency Club is good for snacks throughout the day and it puts out an impressive evening spread. ... If you're not brand loyal, consider the Okura Amsterdam, a crisply modern yet classic five-star property operated by the Japanese Okura chain. Basic rooms are smallish, deluxe ones are larger, but all are excellent. There are two great bars and five on-site restaurants, including a Michelin two-star French dining room and a Michelin-starred Japanese venue. ... Citizen M started in Amsterdam and has three hotels around town, including the original at Schiphol. The chain pioneered the use of modular lodging construction and it's not for everyone. Check-in is via computer and rooms are a bit goofy. But there's a huge social area in the lobby with a grab-and-go market, a coffee bar and evening cocktail lounge.

WINE AND DINE
If you haven't gorged yourself on street food--stands selling Dutch pancakes, stroopwafel and herring are everywhere--you'll find all manner of Asian and European restaurants. JoeSentMe member Jan Kos recommends John Dory, one of the city's most-honored fish houses. You should listen to Jan. He visits Amsterdam four times a year and runs Cheeseland, a Seattle-based importer of fine Dutch cheeses. ... The three-branch Moak Pancakes is as far from an IHOP as you can imagine. Its well-crafted American pancakes can be topped with inventive sweet and savory options. There are also fresh-pressed juices--watermelon and coconut and pineapple, oh my!--as well as fruit, salad and yogurt bowls ... I wanted to tell you about The Avocado Show, a restaurant that puts the delectable fruit in most dishes and their specialty cocktails. But I could never get into any of its three locations and lines often stretch out onto the street.

LOCAL COLOR
Numbers gurus say there is one bicycle for every resident in Amsterdam and everyone gushes over the city's commitment to pedal power. But it's a relatively recent development. And you'll see just one kind of bicycle in the city. Locals all use the classic "Dutch bike." They are heavy, usually with coaster brakes, fenders and, of course, baskets. You sit upright on the step-through frame. The bikes always have a skirt guard and mudguard to keep riders clean and a chain guard to protect the mechanics. ... Street markets are part of Amsterdam's social fabric. The aforementioned Albert Cuyp Markt meanders for blocks and you'll find all manner of groceries; spring rolls; cheeses, olives and spreads; falafel and kebobs; and, of course, snacks like hot, freshly made stroopwafel, cookie wafers held together with caramel filling. And Jan Kos tells me he buys artisan cheeses and artichoke hearts at the Saturday-only Noordermarkt. "It's very busy with local people buying their food for the weekend," he says.