The Last Flight
From Shanghai
THURSDAY, FEBRUARY 6, 2020 -- How badly did Scott and Zelda want out of Shanghai last week? They booked United Airlines, which until the Coronavirus was running daily nonstops to Newark and three other hubs.

After years of indifferent, sometimes awful and sometimes abusive service, Scott and Zelda* hate flying United between China and the United States. They and their two kids usually fly Cathay Pacific from Shanghai to Hong Kong, then connect and fly back to New York.

"I would rather change planes than book United any time," Zelda, an American, told me as she sat at my dining room table on Tuesday sipping tea. "But we thought less airport time, less travel time. Let's grab the first direct flight we can and get out of here."

Scott, her husband, a Chinese national, shook his head as he sipped from a water bottle he brought himself. "It's panic. You don't know what is true. You just want out." 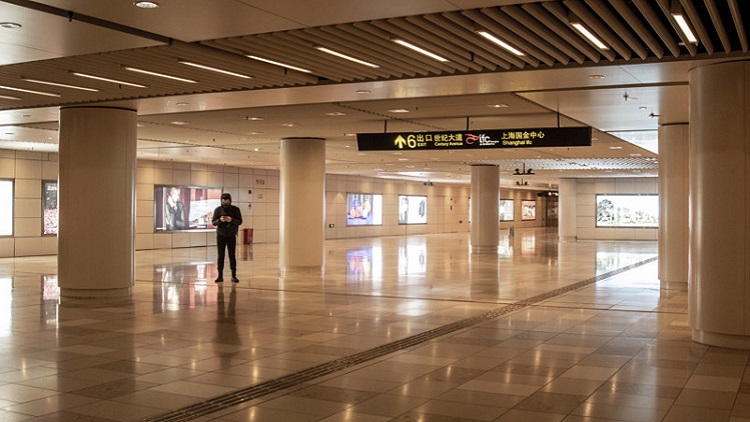 When the last flight out is United, so be it. Out is safe. Away from China. Away from their Shanghai flat. Away from the Coronavirus. Back home to New York, where Zelda grew up, where Scott is now comfortable and where their adolescent children want to call home.

Let me explain. I've known New York-born Zelda since she was a child. She went to China to teach English and met Scott, a Chinese-born entrepreneur. They've been together for two decades. They and their kids are bicultural, with homes in Shanghai and New York. I've visited them in Shanghai, met Scott's parents when they visited New York. Before they became frequent China flyers, I helped Zelda's parents plan their first trips to Shanghai. It's an amazing 21st-century tale of an unlikely extended transpacific family that met by chance, bonded by marriage and now have deep roots in both societies.

Then came the Coronavirus, fast and hard and confusing, and the world turned upside down.

Scott and Zelda first heard about the virus in late December. "People were talking about SARS coming back," Scott said. The talk on social media--nothing official, of course--was about "some kind of disease in Wuhan and people blocking off markets," Zelda added.

In early January, official Chinese government sources like CCTV were branding as liars the doctors who first alerted the world to the Coronavirus in Wuhan, a city of about 11 million in Hubei Province. (Sadly, 34-year-old Doctor Li Wenliang, one of the whistleblowers, died today from the disease.)

Despite the Chinese government's best efforts to suppress information, Scott says "the news started to get out." Still, he explained, it was hard to understand. "It's flu season anyway in China. One or two out of every ten friends would be feeling sick, coughing anyway."

Then the "panic pictures" of "nurses screaming" started filtering out of Wuhan, more than 500 miles inland from Shanghai. And despite government assurances of normalcy and continued planning for a massive, communal Lunar New Year banquet in Wuhan, people all over the country worried.

"All of a sudden, everyone wanted to buy masks," Zelda said, scrolling through her iPhone and showing texts and photos swapped between friends on apps such as WeChat. "It makes you think they know something you don't. You don't know what's going on. You don't know the symptoms."

Scott nodded vigorously. "The only thing we knew for sure is that masks ran out, gloves ran out. You couldn't buy them. Hospitals were suddenly full."

Scott and Zelda's tales of the days before the Chinese government officially acknowledged the crisis are scary because they describe a society with no faith in government officials or their pronouncements. Average folks in China chat secretly, traffic in unverifiable rumors and smuggled photos and use private VPNs to scale the Great Chinese Firewall in order to scan international news sources.

"There were pictures of tanks on the street. But they were white, medical tanks," Scott said. "I saw the video. But you didn't know if that is true or when the pictures were taken." Zelda added: "And we saw people wearing hazmat suits."

The few days between mid-January and the Lunar New Year--China's biggest, busiest, most important cultural and travel period of the year--sounded like a blur. Trips to Scott's hometown, about 90 minutes from their Shanghai apartment. Continued government soft-pedaling of health problems. Appointment of what Scott called a "top hero of SARS" as government spokesman. Rumors of cars with Hubei license plates stopped on the roads leading to Shanghai.

By the time of China's annual, hours-long, televised New Year's Eve entertainment extravaganza, Scott and Zelda knew something was wrong. The government began broadcasting pictures of the gigantic prefab hospital erected in Wuhan and it permitted a brief medical alert at the beginning of the New Year's show. Yet they noted that none of the performers or the audience was wearing masks.

"You just know that maybe it's time to go. You get a feeling," said Zelda.

It was just in time. They booked their United nonstop, but the first available seats out of Shanghai were a week away. It was a chilling time.

"Streets were empty," Scott said. "It is always quiet in Shanghai for New Year because people go home to their provinces. But this was ..."

No one left their homes. Scott's office on the Bund was locked down. So were many restaurants and markets. On his only trip out of the apartment between New Year's Day and the flight, Scott had to talk his way into his office building to retrieve his laptop.

"Everyone just stayed at home and ordered food and supplies delivered," Zelda explained. "You called friends to see if they wanted to go to dinner, but no one wanted to go out. Besides, Scott didn't want to meet anyone, either."

"I was afraid we'd get the flu and they wouldn't let us fly," he explained. "I didn't want to see anybody."

A day or two before their departure last week, Zelda said, the situation changed drastically. A gate in front of their apartment complex was closed and locked. No one was allowed in or out. The government extended the traditional week-long New Year holiday period by fiat and told everyone to stay home and self-quarantine.

"It was fear of the unknown," Zelda thought. "It makes you panic."

Then the men came.

There was a knock at the front door. Scott answered. A mob about 20 men, half wearing hardhats and carrying sledgehammers, was waiting. They demanded to see everyone's government-issued identity cards."

I was confused. "The police? The military?" I asked. "Were they in uniform? Did they have badges or show ID?"

Zelda rolled her eyes and spat out a string of terms: hired hands, militia, gangsters. She tried to explain to a fellow American the micro-level apparatchiks who control daily life in China. She and I struggled to find a common language to describe who or what the mob represented.

Scott, who grew up in the system, would have none of it. You knew they were in charge, he said. It didn't matter who they were or who they worked for or who put them in charge.

"You can tell by their faces, the way they speak," he said evenly. "We speak two different languages. We speak like people. They speak like government."

What were the sledgehammers for, I wondered.

"To knock down doors if you didn't answer," Zelda said.

Luckily, the flight from Shanghai was the next day. They arranged a private car and made the run to Pudong airport in just 45 minutes, about half the normal time. "There was no one on the roads," Zelda explained.

When they arrived at the terminal, they were subjected to a temperature check with a handheld device. Then the normal security. Then the massive crowds at United because it had consolidated the line for all its departures.

The 14-hour flight to Newark was eerily uneventful and quiet. Everyone aboard wore masks except one flight attendant. ("Everyone brought their own," Scott explained.) No one spoke, no one coughed. Zelda noticed there were few Western businessmen aboard. It was mostly Chinese passengers. "And they didn't move," she said. "Usually, Chinese people move around a lot on the long flights, exercising and stretching. But not this flight."

When they landed in Newark, passengers were ordered to stay in their seats. Someone came aboard and called for two Chinese passengers to identify themselves. They didn't.

"They must have called 30 times," Zelda said. "No one moved. But you know America. People barking in English. Maybe people didn't recognize their names or didn't understand. Finally, the passengers were found and they left. We weren't told what happened, but then they let us off."

Scott was surprised. "I thought there'd be a medical check. Nothing. We just got off and left."

Now what? I asked. Zelda said they're holding a return to Shanghai for early March, but United has cancelled China flights through March. "Our return is showing cancelled on the app, but no one has contacted us," she said.

There's another issue: school for the kids. Normally, they'd have until mid-February for the New Year's holiday. But Chinese officials have closed schools until at least the end of February.

"No one knows," Zelda said. "When schools reopen, then maybe we'll know something."

* Scott and Zelda are not their real names, of course. I've used pseudonyms to protect them from potential retribution by the Chinese government. I've also obscured a few key travel details and specifics to protect their identity.