In this "new normal" of "community spread" and "social separation," how are we feeling now about common-use amenities replacing single-use plastic bottles in hotel bathrooms?

And is it still cool for the hotel industry to build new properties with tiny guestrooms specifically designed to drive us to for-profit coffee-bar-like public spaces in the lobby?

Of course, I don't expect the hotel industry to switch gears. They will claim poverty because of this travel turndown and continue to build and provision properties that make zero sense in the social-separation/community-spread new normal.

Even before what remains of the travel industry went to hell in a political handbasket last night, United Airlines revealed some truly chilling thoughts about the rest of 2020. Although United stressed that it wasn't guidance but a worst-case scenario, the airline is prepping for a 70 percent plunge in revenue in April and May; a 60 percent plummet in June; a 40 decline percent in July and August; a 30 percent fall in September and October; and a 20 percent stumble in November and December.

It'll be a footnote in the history of the Coronavirus, but this probably means the end of most Airbus A380s in commercial service. The now-discontinued superjumbo has been a financial disaster for Airbus and the planemaker admits it should never have been built, but the plane did have some niche applications. With Lufthansa, Qantas and Korean Air rushing to ground their A380 fleets during this crisis, however, you have to wonder how much longer you'll see the plane anywhere but a specialty operation like Emirates Airline.

Remember last week when we were angry at the airlines for ... um, actually, I forgot. Last week was so long ago ...

Thanks for asking, but, no, my unbreakable plan to go to Italy next week broke. And, honest, if we didn't have sterling #IoRestoACasa reporting from Rome by Erica Firpo and elegant essays by Kathy McCabe, I'd go and do my job. But we've got it covered.

Besides, Air France, my scheduled carrier, is in chaos. At 2:06pm ET on Tuesday, Air France cancelled my Genoa-Paris/CDG flight and told me to apply for a refund because it was "unfortunately not able to rebook" my Genoa-CDG-New York itinerary. At 10:07pm, I got an E-mail receipt for my refund request. Yet at 4:15am ET Wednesday, I got an E-mail telling me I'd been rebooked on another Genoa-Paris flight. But at 5:23am I got still another note saying the rebooked Genoa-Paris flight had cancelled, too. Yet AF said it rebooked me Genoa-Rome-JFK on Alitalia in coach. So now I have lost the business class flights I booked, lost the replacement, got a refund request on record and am apparently holding coach flights with a different routing on a different airline. La dolce vita, right?

Meanwhile, back at the vast JoeSentMe world headquarters in Cold Spring, New York, I am 49 miles north of the New Rochelle Containment Zone and 150 miles south of this week's South Glens Falls earthquake. So, much safer.

Look, I don't care if you love Trump or hate Trump or pay no attention to Trump. His performance from the Oval Office last night was awful, incoherent and despicably misleading. 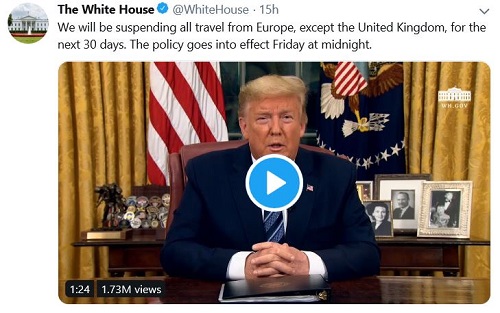 Working from a prepared text and reading from a teleprompter, he said he was "suspending all travel from Europe to the United States for the next 30 days." That's not analysis of what he said. He did not imply it. I did not infer it. He said it. The White House Twitter feed repeated it and provided the clip.

Yet less than an hour later, the Trump proclamation was published and it was nothing like what Trump said and the White House retweeted. American citizens and others were exempt. And it wasn't a Europe-wide ban, not even a European Union-wide ban. It was only 26 nations in the Schengen Area. Two hours after that, as if its previous "all of Europe" tweet didn't exist, the White House feed dutifully pushed that information.

The chaos created by the disconnect between Trump's statement and his action is still reverberating around the world. Even the airlines literally don't know where they can fly. As late as 2pm today, they are desperately consulting with the government trying to figure out what the next 30 days can legally look like.

All over Europe, Americans are confused, Europeans are stunned--Trump didn't bother to consult or inform our allies or the airlines of the actions in advance--and U.S. travelers are milling around airports searching for flights home.

Why are Americans suddenly desperate to get home? Even while we were trying to translate Trump, the State Department told us we should "reconsider travel abroad." So now Americans abroad are panic buying, fearful that Trump will close the borders even to citizens.

Anyone talk to you about the evils of overtourism in the last couple of weeks? Yeah, me neither.

Anyone who cruises is crazy, if you ask me. They've always been Petri dishes of diseases. And I never want to be one of the passengers on a modern-day Flying Dutchman.

If it'll take a year or so for a vaccine, and there's not yet a cure, the Coronavirus will be back next winter, too. Isn't that special?

Who knew comedian Ed Wynn, who in 1921 invented the 11-foot pole for people you wouldn't touch with a 10-foot pole, would be a social-separation icon a hundred years later?

I talked to five "experts" this week and no two of them agreed on the length of time the virus remains active on inanimate objects like a seatback video, a hotel-room doorknob or even Amazon packages. So wipe everything down. Wash your hands obsessively. Do your best social-separation Stevie Nicks--but twirling's optional. And, yeah, I know most of us look and sound more like Jack Black and Joan Cusack faking Stevie, but we're not supposed to be in bars now.

Want good news to end this depressing column? Fair enough. Thanks to this week's battle between Saudi Arabia and Russia over industry capacity, the price of oil has plunged. Brent crude, which most closely tracks the price of jet fuel, is selling around $33 today, down from about $69 on January 3.

That means great business class deals for Thanksgiving and Christmas travel to Europe and Asia.

You know, assuming there's still a Europe at the end of the year. Or airlines to fly there.