Best Coronavirus Advice?
Keep Calm and Listen On
SUNDAY, MARCH 22, 2020 -- We can't fly. We can't travel. Most of us can't go to the movies or a concert. There's no sports. We can't go out for a meal--or even drown our Coronavirus sorrows at our favorite boîte.

But the virus can't take music away from us. So I say: Keep calm and listen on.

The list below is a tremendous leap of faith. This isn't my list of "favorites" per se. Instead, it's the music that helps me keep calm and soldier on. After every one of those bizarre and surreal daily Coronavirus briefings from the White House, I find myself turning to one of these albums for emotional stability and tranquility.

These make me feel better. I hope they'll do the same for you. 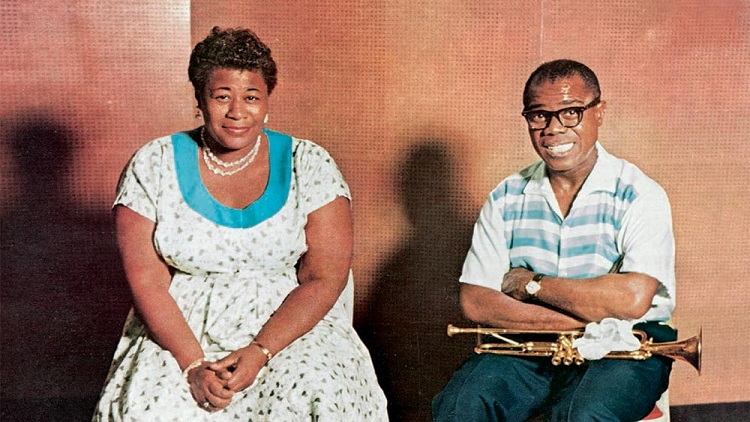 Who doesn't love Ella Fitzgerald? What can't you listen to by Louis Armstrong? And then there were the sublime moments of perfection when Ella and Louis teamed up. No words or fancy titles were needed. Their 1956 collaboration was simply called Ella and Louis, the follow-up just Ella and Louis--Again. The insanely wonderful pairing is backed by Oscar Peterson and his trio. I can listen to these back-to-back on a loop for hours on end--and have, many times, in the last few years. I would alert you particularly to "Autumn in New York" from the second album. It stops me in my tracks every time--even when I'm driving and shouldn't be stopping in my tracks.

FIVE WORDS: RAY CHARLES AND BETTY CARTER
A 1961 release, Ray Charles and Betty Carter, is more in-your-face than the two Louis-Ella albums. But every note, every syllable is brilliant. Betty Carter, a ferocious jazz diva, once said there was no follow-up album because Brother Ray felt that she outperformed him. Imagine an album where someone can credibly claim that outrageous thing. It's that good.

TONY BENNETT AND BILL EVANS. 'NUFF SAID.
Shunned by the major record labels in the 1970s, Tony Bennett went into the studio and recorded two albums with virtuoso jazz pianist Bill Evans for small outfits. The 1975 and 1977 collaborations were then repackaged in 2009 as a double CD set complete with alternate takes. It doesn't matter which of the three you buy, they will send you to a special place. Bennett was at the top of his vocal game in the mid-1970s and Evans was a musical genius. If you don't tear up when you hear Some Other Time, the 11 o'clock number from On the Town, I question your heart and your sanity. Regardless of the music you love, I believe these albums will calm you and entice you and help you get through these crazy times.

BRASIL '66 STILL SWINGS FIVE DECADES LATER
The bossa nova beat that swept through the American pop charts in the 1960s made household names of only three artists: Antonio Carlos Jobim, one of the sound's creators who wrote "Girl from Ipanema;" Astrud Gilberto, who sung on that hit record; and Sergio Mendes. Mendes was the most commercially savvy. He realized that slick, tightly arranged Brazilian sounds could be a potent way to reinterpret the other musical strains remaking the charts of the 1960s. Hence Mendes and his best U.S. group (Brasil '66) had a string of hits with covers of Simon and Garfunkel ("Scarborough Fair"), Bacharach and David ("Look of Love"), the Bergmans ("So Many Stars") and especially the Beatles ("Day Tripper," "Fool on the Hill" and "With a Little Help From My Friends"). All of these and six other Mendes classics appear on his 1970 Greatest Hits album. Lani Hall is the lead vocalist.

BLOSSOM DEARIE FOREVER
Blossom Dearie died in 2009 and I still miss her dearly. I saw the jazz chanteuse and piano player more times at more venues in more cities than any musician I've ever loved. This was a woman with the voice of a giggly teenager and an unerring sense of what made great music. I most often find myself drawn to Jazz Masters 51--Blossom Dearie, a Verve compilation. The 16 tracks are from 1957-1960, after Blossom returned from Paris, where she first found fame. She's accompanied on classics such as "I Won't Dance," "The Party's Over" and "Surrey With the Fringe on Top" by top-notch sidemen like Kenny Burrell, Ray Brown and Herb Ellis. You will be charmed by her version of Cole Porter's "Give Him the Ooh-La-La." This compilation also includes one of the all-time great road songs, Schwartz and Dietz's "Rhode Island Is Famous for You." You did know that minnows come from Minnesota and tents from Tent-esee, right?

IF BILLIE HOLIDAY SANG DYLAN
What would American music sound like if Billie Holiday had lived long enough to cover Bob Dylan and Leonard Cohen? We have an answer: Careless Love by Madeleine Peyroux. She sings and sounds much like Billie Holiday on this 2004 release. She has Lady Day's musical taste and her bittersweet approach to every song. Her cover of Dylan's most beautiful love song, "You're Gonna Make Me Lonesome When You Go," is haunting. She nails Leonard Cohen's "Dance Me to the End of Love" and makes the title tune, a W.C. Handy standard made famous by Bessie Smith in the 1920s, seem new again. A Peyroux original ("Don't Wait Too Long") feels like an old-school standard.

SINATRA AND JOBIM ARE EVERYTHING
After the British invasion wiped American popular vocalists--even Frank Sinatra--off the pop charts, Sinatra still scored a Top Ten winner with 1966's That's Life. He probably thought he was still a huge hitmaker. Thank heavens he did, otherwise he probably never would have embarked on a 1967 art project with Antonio Carlos Jobim. Their collaboration, now best heard on 2010's Sinatra/Jobim: The Complete Reprise Recordings, yielded 20 masterful tracks. The music is amazing. Singing softly and gently, Sinatra wisely adopted Jobim's bossa nova sensibilities. The arrangements--both of American standards and Jobim songs--are handled with great sensitivity by Claus Ogerman and Eumir Deodato. This music is always with me on the road and it'll calm and comfort you in these most uncomfortable and unconventional times.