Empty Coffers, Empty Flights: Bailing on the Airline Bailout
THURSDAY, APRIL 23, 2020 -- The feds this week started sending our taxpayer dollars--well, our great-grandchildren's taxpayer dollars--to the airlines. The funds from our empty federal coffers are the first half of a bailout that will ostensibly save airline jobs through September.

But the CARES bailout is already proving to be a ridiculously poisoned chalice. It should be rethought before the remainder of the $25 billion or so of the grant portion of the bailout is disbursed. Not just for our sakes, but for the airlines' benefit, too.

I was on record saying not a dollar, not a dime, not a penny. And while I knew the airlines would get a bailout, I was hoping we'd impose some rational restrictions on them.

We didn't, of course, and now we're making it costly for us and ridiculously expensive for the airlines.

The only real restriction the CARES bailout imposed on the airlines was a duty of service. If it took the dough, an airline was required to serve all the destinations to which it flew before the pandemic. If it was flying around daily, at least one daily flight needed to be maintained. If it was flying less frequently, at least one weekly flight needed to be maintained. 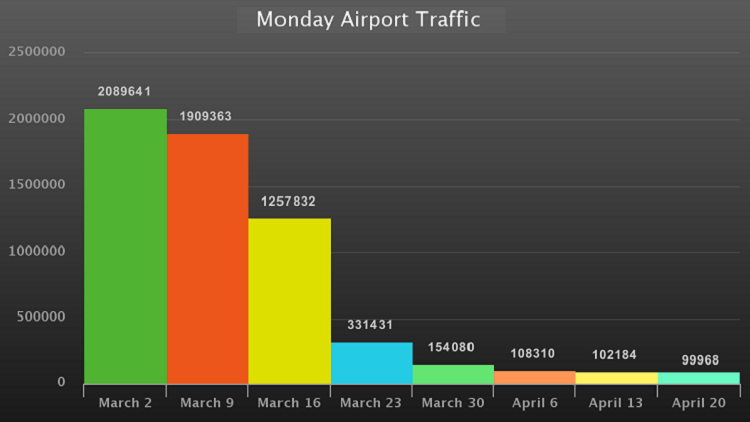 There were two loopholes. Airlines could consolidate flights in a multi-airport region to fewer airports. Thus JetBlue Airways, for example, could drop service at LaGuardia Airport, Westchester (HPN) and Newburgh-Stewart (SWF) and trim its New York schedule to Newark and Kennedy runs.

The other loophole? Airlines were permitted to petition the Transportation Department for temporary service waivers. Given how few people are flying--only about 98,000 passengers were screened at U.S. airports yesterday--airlines have requested hundreds of waivers. They are desperate to end flights that passengers aren't using.

But the DOT has been extremely stingy--one could say insanely so--about granting waivers. Unless it is service to Hawaii, which compels all visitors and returning residents to quarantine, or seasonal resorts such as Sun Valley, Idaho, the DOT has told the airlines bluntly: Keep flying.

The problem? The airlines are flying--empty or nearly empty aircraft. Burning fuel. Running up costs. Polluting the skies. And serving no one.

If you haven't followed the TSA's daily numbers, consider the chart (above) of the last eight Mondays that I've put together with some of those raw stats. Traffic has fallen from nearly 2.1 million flyers on Monday, March 2, to a shade under 100,000 flights on Monday, April 20. That is, roughly, a 95 percent decline.

If we're "lucky," average daily traffic has hit a floor at about 100,000 daily flyers. As you can see by the TSA numbers, it has bumped along at that number on average since early in the month. There is no uptick in our immediate future and it's possible traffic could begin plummeting again.

Yet even with airlines slashing service and planning for 10 or 20 percent of their previous schedules for May and June, there's way too much capacity in the bailed-out skies. Airline executives tell me multiple flights a day are literally flying empty. Nationwide, load factors are below 20 percent, perhaps below 15, possibly even just 10 or 12 percent.

Naturally, this is catastrophic for the airlines. United this week reported a $2.1 billion pre-tax first-quarter loss. Delta reported a pretax quarterly loss of more than $600 million. As the other carriers report in the weeks ahead, the numbers will be equally grim.

The rest of the year will be worse, not better. Airlines had the comparatively healthy months of January and February to cushion the atrocious 1Q numbers. There'll be no such cushion in the second and third quarters. Delta chief executive Ed Bastian said this week it would be two or three years before airline traffic resembles anything like it did in 2019, when more than 900 million people flew.

The answer to that question is surprisingly simple: There is zero leadership in the White House and none in Congress. And the Transportation Department is run by Elaine Chao, the corrupt, inept, often absentee wife of Senate Majority Leader Mitch McConnell.

What should we have done? What should we do now? That's surprisingly simple, too. We need an airline czar, someone empowered to temporarily pull down service fairly, enforce social distancing rigidly and keep fares and airline rules rational.

There are ways to do it. We could, for example, mothball every carrier but Southwest Airlines for the duration. With its fleet of efficient and flexible Boeing 737s, Southwest could reach virtually all U.S. airports. Its simple service--open seating so you can find your own distance, no touchy-feely frills--is all we need for the remaining travelers. A fair fare structure could be developed to protect us. A reasonable revenue-sharing structure could be developed with the grounded airlines.

There are many other ways to do it, of course. All it takes is leadership and a willingness to admit to the reality: Flying is something that won't be back on the agenda for leisure or business travelers until we develop an effective Coronavirus treatment or vaccine.

I hate that we've bailed out the airlines again. The only thing I hate more is that we're forcing them to fly ghost planes to justify the bailout.