No, no, I'm not a psychologist and don't play one in this column. I'm not referring to our mental health bottoming out. I refer only to the state of travel, which seems to have bottomed out and is ticking ever-so-slightly upwards.

Although as the awful song says, travel's been down so long it looks like up. And, trust me, when you're quoting Nancy Sinatra songs you know you're at the bottom.

BEWARE THE IDES OF APRIL
We have covered the Coronavirus's impact on travel since mid-January, but U.S. domestic flying was virtually unaffected well into March. As late as March 8, in fact, more than 2.1 million travelers passed through a TSA checkpoint. Yesterday, it was just 119,000. Load factors have fallen to 17 percent on U.S. airlines, according to the carriers' trade group, which says about half the nation's fleet of commercial aircraft are now grounded. 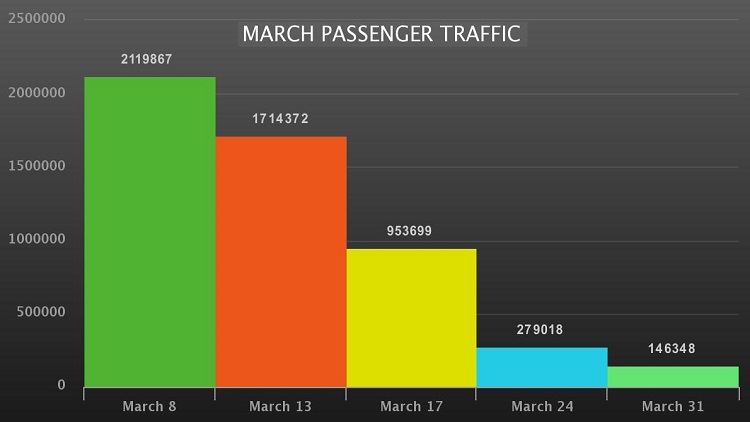 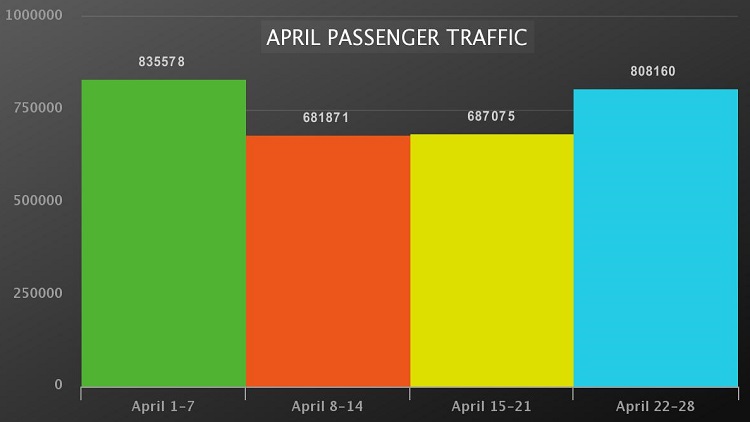 But there is a lot of nuance between early March and yesterday. In fact, as you can see by the chart (left) I cobbled together from the TSA reports, March was when travel collapsed.

Airline traffic continued to crater during the first two weeks of April. It bottomed out during the second week of the month when a total of only 681,871 people traveled, fewer than had flown on what seemed like the cataclysmic sub-million day of March 17. Since then, volume has edged up in the last two weeks. In fact, traffic last week rose 15 percent over the third week of month. And yesterday's 119,629 travelers is nearly 27 percent higher than this month's nadir of just 87,534 travelers on April 14.

Still, remember we are playing in a vastly reduced sandbox. The TSA registered a combined 3,132,313 travelers for the first 29 days of April. That compares to 2.6 million flyers on just one day (March 13) last year. And no one expects a speedy rebound. United Airlines has already predicted it will only carry as many people in the entire month of May as it did on a single day in May, 2019.

MEANWHILE, BACK AT THE HOTEL
Hotel occupancy is rebounding, too, according to statistics compiled by the lodging analysts at STR. They say nationwide hotel occupancy for the week of April 21-25 was 26 percent, up from the previous week's 23.4 percent and mid-April's 21 percent. Even that isn't much of a silver lining, however. STR attributes much of the "rise" in occupancy to recovering Coronavirus patients and front-line medical professionals using hotels to avoid infecting their families.

I HAVE RESERVATIONS ON THE DFW FLIGHT. NAME IS RANGER.
Vice President Mike Pence caused a stir this week when he appeared at the Mayo Clinic without a mask and then explained he flouted its face-covering rules because he wanted to look patients and staffers in the eye. Pence hails from Indiana, so maybe he never heard of The Lone Ranger, the legendary masked Texas Ranger. Plus, you know, medical masks don't cover the eyes. And Pence is governmentally the nation's number two, Tonto, which in Italian, Spanish and Portuguese roughly translates to "not the sharpest arrow in the quiver."

Anyway, a Pence-like excuse won't, um, fly on many airlines in the days and weeks ahead. Starting Monday, a clutch of carriers will demand you wear a face covering in-flight and, sometimes, at their airport facilities. Here's the information I have as of 10pm ET tonight:

American Airlines starting May 11 will require travelers "to wear a face covering (or mask) while on board the aircraft." American promises it'll have masks, sanitizing wipes and gels available for some flights in May and plans to eventually expand the distribution program systemwide.

Delta Air Lines will require a "face mask or appropriate face covering" starting Monday (May 4) at the airport and on board. You will need to wear the covering at check-in, inside Delta Sky Clubs, in boarding areas, on jet bridges and at all times in flight except during meals.

Frontier Airlines, the creepy low-fare/high-fee carrier, on May 8 will require "a face covering over the nose and mouth" at ticket counters, gate areas and on flights. The only surprise is that Frontier isn't charging a mask-wearing surcharge.

JetBlue Airways starting Monday requires passengers "wear a face covering over their nose and mouth throughout their journey." That includes check-in, boarding, in flight and while deplaning.

Lufthansa and its vassal carriers--Swiss, Austrian, Brussels Airlines and Eurowings--impose a face covering rule on Monday. They'll require passengers to wear a "mouth-nose cover on board" and they recommend wearing it throughout the airport, too.

United Airlines, as usual last in with the least information, said tonight that it would require passengers to wear masks beginning Monday. It also says it will distribute masks to passengers who need them. No further details were available.

Make no mistake here, however. Airlines aren't doing this for your protection--or even the protection of their customer-facing staff, most of whom will also be required to wear a face covering. This is about the airlines ducking their duty of care. Want to know how I know? Easy, airlines are telling us. Lufthansa, for example, on Monday will abandon its previous pledge to keep middle seats empty now that it requires us to wear masks.

A MAY 1 UPDATE
And because the news watch never stops--I stole that line from the all-news radio station of my youth--two notable developments overnight since this was written:

It's a boom! The TSA said 154,695 travelers passed through airport checkpoints on April 30, making it the busiest day of the month. It's also more than 40 percent higher than that rock-bottom day of April 14, when fewer than 88,000 people traveled.

Alaska Airlines said that it will require passengers to wear face masks "throughout the airport and flight experience" beginning May 11.

Southwest Airlines says "face coverings or masks will be required for customers starting May 11." No details on whether they'll be required only in-flight or at check-in and boarding, too.