The World
We Left Behind
SUNDAY, MAY 3, 2020 -- When travel, business and otherwise, ended abruptly in early March and most of us went into lockdown, we forgot one thing: the world.

The world we left behind has changed dramatically in the last months--for better and for worse. 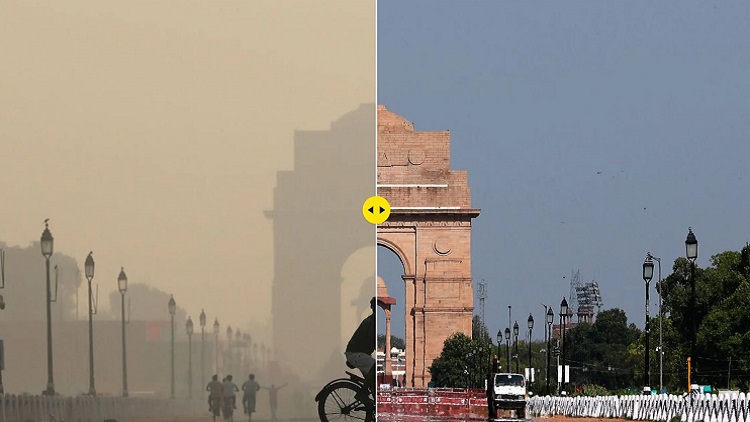 Can you imagine the 101 in Los Angeles free of cars? The air so clean in Delhi (left) that you can see the monuments? The canals so clear in Venice that you can view flora and marine life? Paris and Istanbul without tourists?

The world we've left behind is hurting, economically at least. But the drastic reduction in auto traffic and factory production and a nearly complete halt of air travel--90+ percent in the United States and Canada, close to that in Europe and Asia--has left the world a remarkably cleaner place.

Climate-change activists have agitated for years for a radical rethink of the global economy, claiming we needed drastic action to save the planet. Guess what? They were right. Every photo, every study, every indicator shows less pollution, less litter and trash and at least a temporary healing of the environment.

Take a look at how the world is changing--for better and for worse--as we've stayed home or worked from home and avoided the airlines, the airports and the highways.

AMERICA ABANDONED
What does Chicago--lynchpin of American air travel with hubs for three of our four largest carriers--look like with no visitors? Check out this drone video. San Francisco nearly abandoned? Look at this video. Los Angeles on lockdown with no cars on the freeway? Peruse this series of pictures. The only thing more startling? Las Vegas essentially abandoned.

ROME ALONE, EUROPE EMPTY
Erica Firpo, who's written uplifting pieces on how Italy is dealing with its months-long lockdown, has also shot some amazing video of Rome alone. Narrated by the noted archaeologist and lecturer Darius Arya, the startling film of the Eternal City's empty streets and solitary sites is breathtaking and a little heartbreaking. But you could say the same about video of empty Munich or Dublin. France24, the Paris-based news network, says its film of the City of Light abandoned is like a "post-apocalyptic movie." And Istanbul is equally deserted.

But nature doesn't abhor and even appreciates the vacuum. Venice, for instance is healing without the tourist hordes, mega-liners and relentless noise pollution. Even though this video is in Italian, you get the gist: Cleaner waters mean more flora and fauna in those newly refreshed canals. And you can only marvel at the video of the seaside Welch town of Llandudno overrun by Kashmiri goats.

INDIA INVIGORATED
India's six-week lockdown has been particularly broad. Even visits to the local convenience store for food were barred. It's been brutal for the poorest segment of society. And before-and-after photography of important sites around the country posted by News 18, an Indian cable network, shows how totally traffic has disappeared. Or check out the drone footage from above Mumbai. It shows one of the world's most chaotic cities eerily silent, free from traffic and pollution and gleaming in the smog-free sunlight. "Mumbai needed a rest," one YouTube commentator said of the nearly abandoned city of more than 18 million. All of India needed the ecological breather, in fact, and the result has been plunging pollution levels.

THE BIGGER, CLEANER PICTURE
If you doubt the world has changed in our absence, pay attention to the work done by NASA, which offers irrefutable photographic evidence that we're doing less harm to the planet by separating from it. Here's what China looked like before and after the lockdown. You can see the pollutants recede as the country hunkered down and abandoned automobiles, shut factories and reduced the use of fossil fuels. NASA documented the same phenomenon via satellite photos of India. The Guardian offers up eye-popping then-and-now pollution photography in major metropolitan areas. But it's important to note that it's not only cities in developing nations that have cleaned up their acts. Consider this CBS News film and photography that offers cautionary looks at cities such as New York, Los Angeles and London.

What's the bottom line here at the bottom line? I honestly don't know. All this is above my pay grade. Empty cities are eerie and unnatural. They are meant to be lived in, visited and admired. But helping heal the planet while we left the world behind isn't a bad thing, either.

It'll be just one more thing to consider when we finally get back on the road in the months--years?--ahead ...