The Agony of Defeat,
The Calmness of Certitude
SUNDAY, MAY 24, 2020 -- No pitch has yet been thrown in anger in the 2020 baseball season, but I know this much is true: The Indians are five games out.

The Indians are always five games out. Eternally and forever.

That's because the Cleveland Indians haven't won the World Series in my lifetime. And for five years before that. The Indians, my team, are the most forlorn in baseball, having last won the Series in 1948.

If you don't care about baseball or only pay sporadic attention, you probably didn't know that. After all, the Boston Red Sox were the ones famous for losing. Not only did they have the exotic and romantic Curse of the Bambino, the Sox also had Fenway Park and a legion of illustrious fans who dominated the media with oh-so-poetic tales of woe. Balladeers like James Taylor even wrote and performed plaintive songs about their selfless devotion to the Red Sox.

And the Chicago Cubs, baseball's other celebrated losers, were beyond cool, too. They had old-timey, handlebar-mustachey Wrigley Field right in the heart of Chicago. They had cute logos with blue bears. And they had Ernie Banks, the superstar with a megawatt smile and the jaunty mantra beloved by fans everywhere. "Let's play two!" he once famously said. 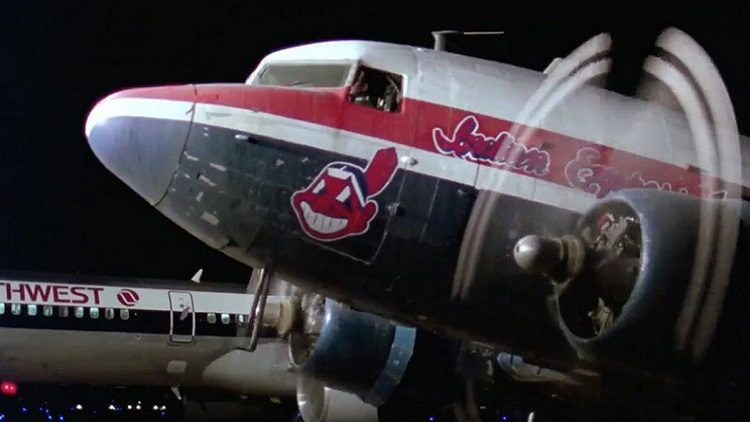 But the Indians and us downtrodden Indians fans? We had nothing. A pug-ugly baseball park generically labeled "Municipal Stadium." Horrific teams. Stars-to-be traded too soon. Stars-that-were acquired too late. Those other fans had that toddlin' town or Boston. We had the dying Cleveland. And a controversial logo that seems more politically incorrect every year.

No hope, no style, no panache and uniforms with a leering cartoon Indian that makes you cringe. We lost, quietly, ignominiously, endlessly.

We are, even when the season hasn't started, five games out.

Oh, sure, they once did a movie about us--Major League--and it was laugh-out-loud funny. The hero gets the girl, too. But even in Major League we lose in the playoffs after the credits roll. That's why there was a sequel--and, of course, most of the stars had moved on, the hero's girl was nowhere to be seen and the Indians still don't get to the World Series.

And there was that ultimate indignity. When the Cubs and their fans finally won their World Series, in 2016, they did it against us. In the most humiliating way possible. The Cubs came back from 3-1 games down and then beat us in extra innings in Game 7 on our home field. To add insult to indignity, Leonard Cohen died five days later and Trump was elected president the day after that. What, exactly, has been right with the world since that 2016 trifecta of tragedy?

But the odd thing about being 67 years old and never having seen your team win? You get used to it. It is almost calming. It becomes part of your lifestyle. There is no stress. You always know the future. The Indians will lose, and lose in the most awful way possible, so what's to worry? Sit back, have a beer, go with the flow down the toilet.

I learned that lesson when the Indians came closest to winning, back in 1997. The Indians lost that Series 4-3, too. Also in Game 7. Also in extra innings. Also to a team (the Florida Marlins) that had no business winning. But there was one moment when the Indians were just a few pitches away from snapping the losing streak that has dogged them since that year Dewey defeated Truman.

I know we were close because the announcer, Bob Costas, was reciting a litany of long-retired Indians players who would somehow be vindicated by an Indians World Series victory: Chico Salmon, Leon "Daddy Wags" Wagner, Jack Kralick, "Sudden" Sam McDowell and even Vic Davalillo. And I was sitting on my couch--alone because I was unfit for human companionship--genuinely terrified.

"I don't know how to act if the Indians win," I remember saying to myself. "What do you do when your team wins? How do you act? What do you say?"

"Oh, grow up. It's just a game," I heard my wife say, so I must have said all that stuff out loud after all.

My wife, no sports fan, doesn't know what she's talking about. But from that moment on, having had defeat once again bloodily torn from the jaws of victory, I've been sanguine about the Indians. It's all cool. I almost prefer it when they lose. It's comfortable. The agony of defeat eventually morphs into the calmness of certitude. There's a blissful serenity that comes with rooting for the eternally losing team.

In fact, I knew the Indians would lose in 2016. Check my Twitter feed. Even up 3-1, I was calm, knowing full well the Indians would be the Indians in the end. I tried to warn the others--that legion of nameless, faceless, plebian Indians fans who can't help but hope--but they were all convinced 2016 was finally the year.

It wasn't, of course, because it's never "the year" for the Indians. I don't have to wait 'til next year anymore because next year will be just like this year and last year and last decade and last century. We're always Dewey.

The Indians, even with no teams playing this Memorial Day Weekend of 2020, are five games out. That's just how it is--and I'm okay with it. Honest. I've been okay with it for a long, long time.

And being an Indians fan, it occurs to me, is a lot like being a frequent flyer. Even when we're not doing it, we're losing.

Sure, we haven't been on a plane for months, but we know the next flight out, whenever it comes, will be delayed 45 minutes or go mechanical or be the one diverted because some yahoo--probably a Cubs or Red Sox fan--refuses to wear a mask.

Once you get used to it, the losing and the delays, it's not so bad at all.

Us frequent-flying Indians fans already know what comes next.