Movies to Make the World
Go Away For a Little While
SUNDAY, MAY 31, 2020 -- News is what I do. I consume it, write it, edit it, produce it, live it. I've been thinking about it nonstop my entire life. It is, when you strip me down for parts, what I am.

But when I found myself walking away from the news this awful weekend--overcome by grief, consumed by anger, heartbroken, frightened and beaten down--I headed for my break-glass-in-case-of-emergency stash of films for chasing the world away. I can slip one of these in the DVD player or PC--yes, I still have DVDs--and the news goes away for a little while.

We're all in pain just now. Maybe one of these will make the world go away for you, too.

Tomorrow, the battle begins again because it must. I cannot fathom giving up on the America we hope to reach. But tonight, maybe track one of these down on your favorite streaming service and give the world a pass.

When I need to escape from death and disease and hatred and agony, I immediately go to Horse Feathers, a gloriously anarchic 1932 comedy jewel from the Marx Brothers. From the moment Groucho begins warbling "Whatever it is, I'm against it," you're living in his hilarious new universe. He cavorts in robes and tasseled mortarboard. He literally and figuratively pulls professorial beards, bursting bubbles of privilege and pomposity. He gets the password (Swordfish!) wrong, croons in a row boat, woos the "college widow," and, of course, makes a sarcastic hash of everything. The movie ends with what even ESPN admits is the greatest celluloid football scene of all time: a manic, horse-drawn romp on the gridiron with Harpo and Chico. Horse Feathers may not restore your faith in humanity, but, damn, it reminds you to laugh out loud. I mean, Groucho dances, plays the kazoo and, at one point, breaks the fourth wall and urges you to leave the theater if you are not laughing. There are only two things wrong with Horse Feathers: The surviving print has some odd cuts and jumps--it was edited in 1935 to mollify prudes--and the film runs just 68 minutes. But do what I do: Watch Groucho sing "I'm Against It" over and over again.

THE DAY THE JOURNALIST CAUGHT FIRE
Whenever I question my devotion to news--as I have in these last few days--I return to my journalistic inspiration: a 1961 British sci-fi thriller called The Day the Earth Caught Fire. A riveting Cold War-arms race flick--the screenplay won the British Oscar--it follows a washed-up reporter (Edward Judd) and his sympathetic editor friend (Leo McKern) as they unravel the mystery of a sudden global environmental catastrophe. I was nine years old when the movie made it across the pond in 1962 and I was seduced by the film's denouement: a shot of two tabloid front pages, one heralding the Earth's salvation, the other using what we ink-stained wretches call "end-of-the-world" type for its literal purpose. In that instant, I knew what I wanted to be: The guy who gets the story and, not totally coincidentally, gets the girl (Janet Munro), too. If JoeSentMe.com has helped ease your life on the road since 9/11, it's because a nine-year-old saw a movie.

HOW FOUNDING FATHERS SANG AND DANCED BEFORE HAMILTON

In these moments when the American foundation seems to be shifting under our feet again, I withdraw to 1776, the clunky-but-charming 1972 film version of the 1969 Broadway musical. It stars the brilliant Howard Da Silva as the mischievous, pragmatic Ben Franklin; Ken Howard as the distracted, hunky Thomas Jefferson; and William Daniels as the rigid, prickly, driven and disliked John Adams. The movie also features a luminous Blythe Danner as Mrs. Jefferson. And, especially now, watch John Cullum singing "Molasses to Rum," a bitter, searing, unsparing indictment of the Founding Fathers' decision to table the corrosive issue of slavery. The DVD and streaming prints available today restore about 20 minutes of the movie cut when it was first released. The restoration includes a minuet called "Cool, Cool, Considerate Men" that was purportedly excised to appease then-President Nixon. I am too cynical to be starry-eyed about America's birth--hey, I read Charles Beard--but, like Lin-Manuel Miranda, I like the idea of Founding Fathers who sing and dance.

IF ONLY DARK AND SAVAGE WILL DO
If only a film that will throw you into another world will do, may I suggest Three Days of the Condor? It'll toss you into the strangest world of all: The paranoid, confusing days after Watergate, when we thought that was the worst crisis we could imagine. Director Sydney Pollack always bristled whenever critics put the 1975 film in that political context. He insisted he was simply trying to make a great spy thriller. And, boy, did he. The cast is fabulous: Robert Redford, Faye Dunaway, Cliff Robertson, Max von Sydow and John Houseman. Based on a James Grady novel, the screenplay is gritty and frightening. And, boy, the movie is dark. Politically dark, cinematically stark, socially bleak and emotionally oblique. You'd call it film noir, but it's too culturally aware. Set mostly in the ugly, deteriorating New York City of the 1970s, the film is simultaneously calmed and electrified whenever von Sydow appears as a self-possessed hit man. He is cruel and amoral, yet honest and even sympathetic all at once. The movie is the source for a little-seen 2018 television serial called Condor. It's not bad, but it can't match the suspense and savagery of the original. After all, how do you top a pea-coated Redford, having lost everything but his cynicism, freeze-framing into the maw of 1975 Times Square? 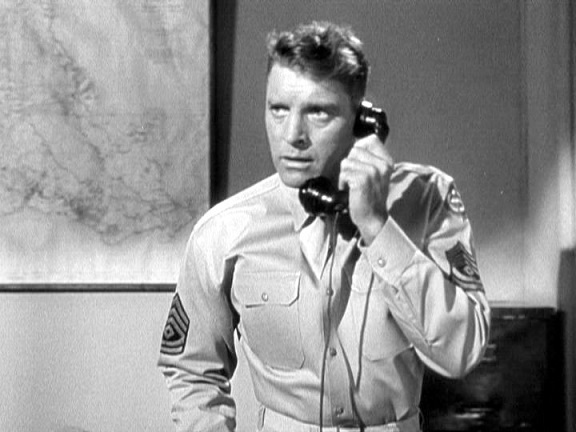 I was stunned when I first screened From Here to Eternity on a wide-screen, wall-mounted TV. Every frame of this black-and-white masterpiece displays like a fine-art poster. (No surprise that it won an Oscar for Cinematography.) This 1953 adaptation of a James Jones novel is justly famous for its Hawaiian locales, Frank Sinatra's Oscar-winning supporting performance and the scene with Burt Lancaster and Deborah Kerr rolling around in the sand and surf, the closest you could get to movie sex in 1950s America. There's a very deep supporting cast (Montgomery Clift, Donna Reed, Ernest Borgnine, Jack Warden and Claude Akins), a frothy potboiler of a script and that stunning photography. But the second time through, forget it all and focus on Lancaster. He is simply, physically, objectively gorgeous. He seems sculpted, uniforms tailored to a fare-thee-well, movements simultaneously precise and fluid. His chiseled face, barking voice and steely body dominate every scene he's in--and a few that he isn't.