Airlines Are Mortgaging
Our Loyalty for Loans
THURSDAY, JUNE 18, 2020 -- Let us put the pandemic aside for a moment and chew on this: The airlines are mortgaging our loyalty.

American Airlines said last week it planned to pledge American AAdvantage as collateral for a $4.75 billion loan it hopes to get from the federal government under the terms of the CARES Act bailout. And United said this week that it is mortgaging MileagePlus to three lenders--Goldman Sachs, Barclays and Morgan Stanley--for a $5 billion loan.

For a whole parcel of reasons, United's decision to use MileagePlus for a private loan has forced it to disclose minutia about the program that we've never previously known. Or, at least, never knew for sure. Its Form 8-K filing is chockablock with tidbits, trivia and hard facts.

What it details is that we're suckers, generating billions of dollar of value each year for airlines even as they've devalued the programs and made rewards harder to get and more costly to claim.

I knew you wouldn't want to plow through United's 106-page filing--there's also a 56-page prospectus outlining the financial terms of the loan--so I've done it for you. And to make it easier, I've put the best bits in bullet-point format. 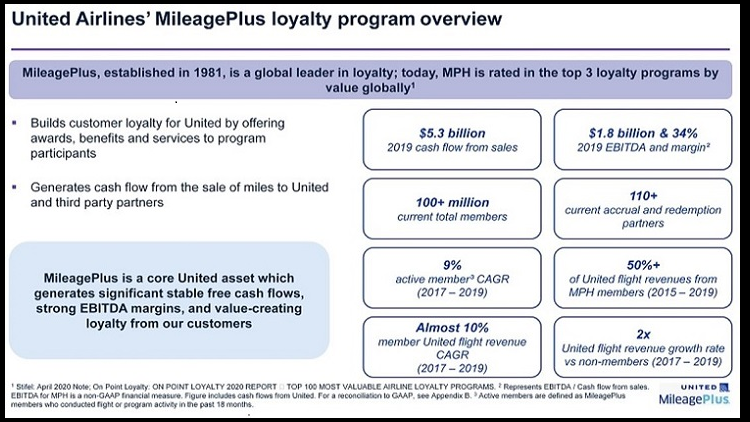 The value of our loyalty United values the MileagePlus program at $21.9 billion. Meanwhile, American Airlines says AAdvantage is worth between $19.5 and $31.5 billion.

There are a lot of us. United claims more than 100 million members of MileagePlus.

Few of us are active Only 9 percent of United's members are considered active. Active being someone who flew United at least once in 18 months.

We pay for the privilege. For the last five years--January, 2015, through December, 2019--United says MileagePlus members forked over a 50 percent premium on every mile flown. It could be because members are business travelers who tend to buy later and/or travel in premium class. We also connect more (see below) and connecting itineraries cost more. It could also be because we fly internationally more frequently. Or because the hardest-core bargain hunters don't care about miles and frequency programs. Or, you know, because we're suckers who don't shop hard enough.

We're high-earners. United says 65 percent of MileagePlus members earn more than $100,000 a year. This shouldn't surprise you. When Martin Deutsch launched Frequent Flyer magazine in 1980, subscribers earned $52,000 a year. Of course, maybe MP is playing in a lower-rent zone than the early days of frequency programs. That 52K in 1980 translates to $174,000 in 2020.

We connect a lot. Fifty-two percent of United MileagePlus members do not live in a United hub city. That means we do a lot of connecting travel and spend way more time in airports than other flyers. It also explains why chief executive Scott Kirby has spent so much time rebuilding United's network after it was partially dismantled by previous management.

We are coastal. United's hubs are heavily skewed to the East and West coasts, of course, but United also has mid-continent hubs in Denver, Houston and Chicago. But they aren't where the flyers are. Of the 48 percent of MileagePlus members who fly from a hub, 13 percent of them are located in the New York Metro area. That's nearly twice as much as United's second-largest hub (San Francisco Bay Area at 7 percent) and almost as much as the mid-continent hubs combined (16 percent).

We're falling further behind. For all our dissatisfaction with frequency programs, United is still beating us. Year-over-year over the last three years, United is issuing an average of 6 percent more miles per year. Our redemptions are only growing by 4 percent a year, however.

Elite status is a trap. Once a member reaches Premier status in MileagePlus, they spend 14 times more with United than non-elite members.

We're not United's best customers. We've discussed this repeatedly over the years, but we are a tiny piece of MileagePlus. The airlines' best customers are clearly banks who buy miles. According to United, flying accounts for only 29 percent of the miles generated in MileagePlus. Third-party buyers (almost totally banks such as Chase, of course) account for the other 71 percent

United screws the banks, too. United doesn't treat Chase and other third-party buyers any better than they treat us. An example: Although they are more than 70 percent of United's MileagePlus business, the third parties pay an average of 2 cents for each mile they buy. United charges itself only a penny per mile for the credits it awards to us via flying.

The high cost of being a good customer That 2-to-1 price difference obviously benefits United. MileagePlus contributed $5.3 billion of revenue to United last year. (That's 12 percent of United's total 2019 sales.) Notably, the miles that third parties buy contributed $3.8 billion of that revenue.

We're still flying the unfriendly skies. United didn't tell its lenders how many awards it issues. (Or at least, it wasn't made public in the filing.) But it did say that of all the awards claimed, 80 percent were used for flights on United Airlines metal.

And now for something completely different ... The larch, er, no, wait, I meant Coronavirus coverage.