What Does American Music Sound Like? Five Suggestions
SUNDAY, JULY 12, 2020 -- What does American popular music sound like?

Is it Stephen Foster, so-called "father of American music?" Maybe, but do you hum "Camptown Races" often? And, honestly, when was the last time you heard "My Old Kentucky Home" when it wasn't Derby Day?

Is it Louis Armstrong, Bing Crosby, country, Sinatra, bluegrass, Gershwin, folk, Motown, Peggy Lee, the Beach Boys, Dylan, Beyonce, rap, hip-hop, Sondheim? All of them? None of them? Is it Barry Manilow or Neil Diamond or Johnny Mercer? Billie Holiday? Ella? Aretha? Is it a John Philip Souza march? The Everly Brothers begging Little Susie to wake up? Chuck Berry telling Beethoven to roll over? Elvis?

No, I promise, I won't keep mentioning musical styles and great artists. I was merely trying to make the point that American music is rich and relentless and a kaleidoscopic amalgam of styles and influences. There's no right answer. Only stuff you might love and give to a foreign friend if she or he asked "What does American popular music sound like?"

So with my deepest apologies to Miles Davis and Blossom Dearie and Alicia Keys and Woodie Guthrie and The Eagles and a hundred more, these are five artists I'd mention if a strange visitor from another planet asked me about musical truth, melodic justice and the American way.

Your mileage may--almost certainly will--vary. But I think I could live with these.

WHERE AMERICAN POP MUSIC BEGINS
It's impossible to top composer Jerome Kern's seminal line about Irving Berlin: "Irving Berlin has no place in American music," Kern once said in response to a question. "He is American music."

The irony, of course, is that Berlin was born Izzy Baline in Russia in 1888 and many of his tunes subtly call back to Russian folk music. Still, Berlin's gift was the ability to plumb his Old World roots, merge them with a plainspoken New World mindset and create the essence of what became American pop music in the first half of the 20th century. 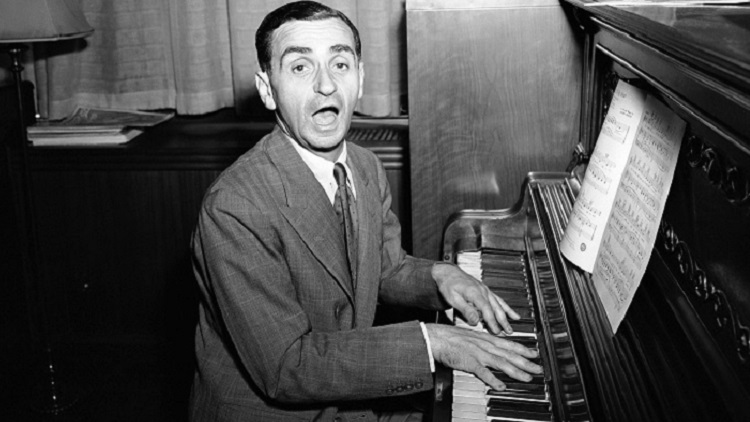 Want to hear some of it in its original form? Irving Sings Berlin is 22 tracks of Berlin banging out his own music. He was a bad piano player and a very poor singer, yet Berlin could deliver his stuff with genuine passion, especially when he courted Broadway investors. Many of these bits are just that: Berlin doing demos of his least-famous show tunes. Surprisingly, when he wasn't writing national anthems ("God Bless America"), memorable period pieces ("Alexander's Ragtime Band") or evergreen love songs ("The Best Thing for You"), he was crafting tight story songs that had wit and bite and, sometimes, bile. You can't hear "The Policeman's Ball" or "The Hon'rable Profession of the Fourth Estate" without remembering that Irving Berlin wasn't just American music, he was American musical theater, too.

GENIUS ON HIS OWN TERMS
Artie Shaw hadn't played the clarinet in public for more than 50 years, but it is a sign of his singular genius that his death in 2004 at the age of 94 was still major worldwide news. Shaw was, simply, the most accomplished clarinet player who ever lived.

Best known as the man behind swing-era classics such as "Begin the Beguine," "Frenesi" and "Stardust," Shaw's influence ranged far beyond a few megahits. His best bands--the 1938-1939 group that toppled Benny Goodman off his "King of Swing" perch; the 1940-41 orchestra with a huge string section; and his cerebral 1944-45 effort--stand at the apex of the big-band era. He was the first to write a concerto in the popular music style. He hired Billie Holiday, the first white bandleader to employ a black female singer on a full-time basis. And his contentious relationship with pop-music fame--he quit several times before his retirement in 1954 because he felt the fans weren't hearing the music--paved the way for musicians like the Beatles to give up touring to concentrate on studio work.

A 2001 RCA release, The Very Best of Artie Shaw, offers 18 tracks from all three bands. A 20-track CD, a 1987 Sony compilation called Begin the Beguine, focuses primarily on the 1938-39 orchestra, but it also includes recordings with a small group called the Gramercy Five.

A MASTERPIECE SUPREME
Here's the thing about a masterpiece like A Love Supreme, which was recorded 56 years ago by John Coltrane: Anything you can write or say about the music is irrelevant hype because all that matters is the work itself. It exists. It is 33 minutes long. It is jazz in a form that never was before. It changed the genre forever. It has influenced generations of musicians. It has inspired millions around the world with its intensity and spirituality.

If it matters--and it doesn't, except for the curiosity factor--the accepted wisdom is that Coltrane earned $244 plus royalties for the moment when he, his God and his tenor saxophone were one. His sidemen, pianist McCoy Tyner, bassist Jimmy Garrison and drummer Elvin Jones, each received $142. There is an interesting 2-CD set from Verve's Impulse! label called A Love Supreme: Deluxe Edition. Released in 2002, it offers the studio version as released in January, 1965 ,and the only live performance of the work, a 48-minute sextet rendition from a French jazz festival in July, 1965.

FLYING HOME WITH ILLINOIS JACQUET
I was new to both business travel and to jazz in the late 1970s when I started flying to Chicago. I went to cover trade shows, but I hung around for Illinois Jacquet. In those days, Jacquet fronted a small group at the old Blackstone Hotel. I did not know at first that he created one of the ethereal moments in jazz: the 80-second solo on Benny Goodman's "Flying Home" that Jacquet improvised at the age of 19. I did not know then that he and Lester Young invented honking and that Jacquet popularized the altissimo range of the tenor sax. To me, back then, he was just a great player who always seemed to be at the Blackstone when I was in Chicago.

In some ways, that was Jacquet's portion in life. Other sax players are more famous, but Jacquet was the first jazz artist-in-residence at Harvard. King Oliver and Louis Armstrong are the foundational players of jazz, but it was Jacquet blowing on the first commercially released live jazz album. It was Jacquet who laid down tracks that have influenced every later generation of tenor sax player. And it was Jacquet who was still blowing strong in 2004 at the age of 81 at New York's Lincoln Center a week before he died.

If you don't know his work by name, stream Flying Home: The Best of The Verve Years. It features many jazz and pop standards that get special Jacquet treatment.

THE KISMET OF OSCAR PETERSON AND HAROLD ARLEN
I was in Rome a dozen years ago when circumstances conspired to rob me of music. What do I find on the first record-store shelf I peruse? A two-albums-on-one CD titled Oscar Peterson Plays the Harold Arlen Songbook. It's a reissue of two separate Oscar Peterson Trio albums of Arlen tunes, one recorded in 1954, the other in 1959. The kismet of finding it and of the twinned albums still excites me today.

There are nine songs common to both original vinyl albums, which offers a fine opportunity to hear a great piano man tackle the same material in two unique ways in a short period of time. Peterson was born Canadian and died there, too, but his work is undeniably American, both as a frontman and as an accompanist for vocalists. (He was the piano player on the Louis and Ella albums that may literally be the greatest American popular music ever recorded.) And what to say of Arlen, the elegant New Yorker and cultivated composer who is revered by singers, songwriters and anyone who dotes on the American sound? You may not immediately recognize his name, but you know his tunes since he crafted some of the most enduring and popular melodies in the American songbook.

Now the obvious question: How could I have missed this when Verve originally put the double-length CD together? Easy. It was released on October 9, 2001. Were any of us thinking about music--American or otherwise--at that awful moment?