Chicken Little Was Right:
The Sky Really Is Falling
THURSDAY, JULY 16, 2020 -- So Chicken Little was right after all. The sky is falling.

More than 20 years ago, I wrote a column called The Worst Week in the History of Business Travel. Now I'm beginning to wonder if we can fall off that floor.

Yeah, come to think about it, falling skies and plummeting floors pretty much covers this week. It has been brutal. Brutal for travel. Brutal for America. Brutal for any concept we may have had about civic leadership.

Check out our day-by-day Coronavirus page. It is a litany of woe. And death. And a maniac governor in Georgia suing his own cities because they're trying to keep people safe with mask mandates. 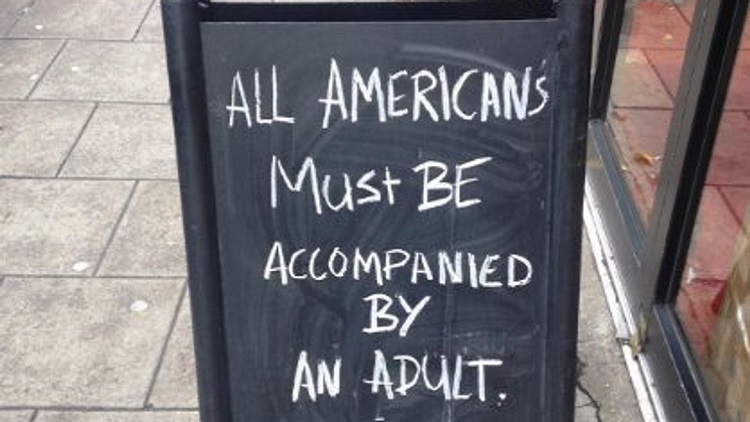 Airline traffic is dropping again. After "surging" to around one-third of 2019 volume during the July Fourth holiday, it's slacking off now. Airlines say their advance bookings are crumbling and nationwide hotel occupancy has stalled at 46 percent. Thousands more rooms are in the construction pipeline and there are real questions about the cleanliness of the ones that are available for rent.

This is not good. Totally understandable, but not good. Not good at all.

A JoeSentMe member, who I've known for years and who is now safely ensconced in Australia, this week sent me a pithy E-mail: "Your all fucked at this stage."

How can I argue with him? Like New Zealand, Australia went hard at the Coronavirus. It locked down. The country's flag carrier stopped flying to keep the country safe. And even with a flare-up this week in Melbourne, Australia's second-largest city, the country has come through.

What do we have? A hundred and forty thousand dead. A collapsing economy. Airlines preparing to lay off hundreds of thousands of workers at the end of the summer. A narcissistic fool in the White House who thinks this is about him. An aging opponent sitting in his basement who thinks that all he has to do to win in a landslide is not be the other guy.

There's nowhere to travel because we are international pariahs. As the Coronavirus rages through the Sunbelt and stresses their hospitals to the breaking point, the world looks at us as global clowns who haven't even been smart enough to avoid the plague. We're getting dissed by signs in front of pubs in England, which hasn't exactly been first-rate at handling the Coronavirus. Domestic flying is plunging, too, because so many places where we'd normally travel in summer--the beaches of Texas and Florida, the Grand Canyon, the California Coast--are suffering.

Business travel? Hah. Most of us--not all of us, but most of us--have been told by our companies and clients that the work can wait. Meetings and conferences and conventions? They've gone the way of pro sports.

And yet, it's not travel that makes this week so dreadful. It's the realization that our civic life seems hopelessly dysfunctional.

Kens and Karens raging about freedom because they've been told to wear masks to keep other people safe and stop the spread. Thank heavens all the ones I've seen decided their freedoms aren't infringed by pants and shirts because, man, these are not pretty people. And this is me, nobody's idea of beauty, talking.

Sure, you can say, they are isolated nut jobs, just like the isolated rioters who give legitimate protesters a bum reputation and supply Fox "News" with endless hours of programming.

The bad news is that these people help pick our leaders. And look who is leading us.

The governor of Oklahoma, Kevin Stitt, is the guy who Trump shot on Fifth Avenue. He refuses to tell Oklahomans to wear a mask, yet he contracts the Coronavirus--probably at the dumbass Trump rally last month in Tulsa--and doubles down on his arrogance.

DeSantis of Florida? Ducey of Arizona? Abbott of Texas and his sidekick, the Lieutenant Governor who thinks people should volunteer to die to save the economy? Brian Kemp of Georgia, who doesn't want any mayor telling their community to mask up?

Cuomo of New York? He's been positively Churchillian--and that is not a compliment. Like Churchill, he became the global voice of sanity and inspired resistance in a moment of existential peril. But also like Churchill, he's been a terrible war general and his tactical blunders killed thousands needlessly.

Fauci? Good guy, dedicated doctor, incredibly smart. American hero with the Presidential Medal of Freedom to prove it. Too bad about his lie about the masks early on that gave the right-wing conspiracy theorists a reason to invent a conspiracy theory. And that isn't hard. These asshats invented a political pedophilia ring in the basement of a Washington pizza shop with no basement. Creating a conspiracy theory about masks is child's play for them.

Donald Trump? I'm a New Yorker, so I'm predisposed to despising him and his entire family of grifters. We New Yorkers always have known what he and his father and Stepford Family were. Worse, though, he is stupid and many of us couldn't see the stupidity for the grifting. If he had even half a brain, he'd put on a mask, urge his Kool-Aid-drinking followers to mask up and keep their distance and he might save the country, rescue the economy and maybe even get himself reelected. But he is aggressively dumb and the sooner we dispatch him, even for the Old Man in the Basement, the better.

But the worst part of this--besides me whining at you for 930 words so far, of course--is that it's all going to get worse. Much, much worse.

The airlines are destroyed. Really, fellow travelers, destroyed. When the CARES money runs out, half of the industry as we knew it back in February will disappear. Thousands of hotels will never reopen. Your favorite restaurant in your favorite town may be gone for good. I have no idea--literally, no clue--when other countries will even let us darken their doors. Conventions as we knew them are a thing of the past, too. Hell, even Republicans admitted that this week when they scaled back their Jacksonville festivities scheduled for next month.

As I told you in the earliest days of this pandemic, yesterday's gone and there's no tomorrow. No one can define what the travel world will look like going forward. There will be many heartbreaks, the very occasional victory (I booked a Hyatt hotel in Manhattan next week for $99 a night.) and lots and lots of disappointment.

But I promise you one thing: This is the last column like this I will write. The sky may fall and/or we'll fall through the floor in the weeks to come. But there's no value going through life waiting for Chicken Little--that was the sequel Beckett never wrote--or watching for craters in the floor to sidestep.

It's exhausting to be here in the worst week of this pandemic. Next week will be better. I believe that. I don't know why I believe that, but I do.

A Friday morning, July 17, update: No columnist produces what I wrote above without trepidation. Is it too raw? Too hopeless? Too angry? But the first story in my feed this morning explains that Thursday was a record day for infections. The second? Trump-retweeted Coronavirus denier Chuck Woolery has gone into social-media hiding because his son has contracted the disease. It all just makes me want to weep. I will use my tears to water my tomatoes and hope for the best