I'm Shocked--Shocked!--to Find That Casablanca Is Not Perfect
FRIDAY, AUGUST 21, 2020 -- There are movies great (Citizen Kane) and short (Dumbo). Epics (The Godfather) and films so epically bad (Plan 9 From Outer Space) that you can't turn away. There are feel-good flicks (It's a Wonderful Life), feel-bad films (American History X) and ones that are both at the same time (Schindler's List).

And then, you know, there's Casablanca. If it is not quite the greatest movie ever made, it is certainly the most felicitous confluence of luck, love, timing, improvisation, schmaltz, style and unsentimental sentimentality ever committed to film. It's got Nazis and antifa, hats and hubris, love and death, hate and heart, snappy quotes and sardonic dialogue and, you know, one woman defiantly strumming "La Marseillaise" on a guitar. 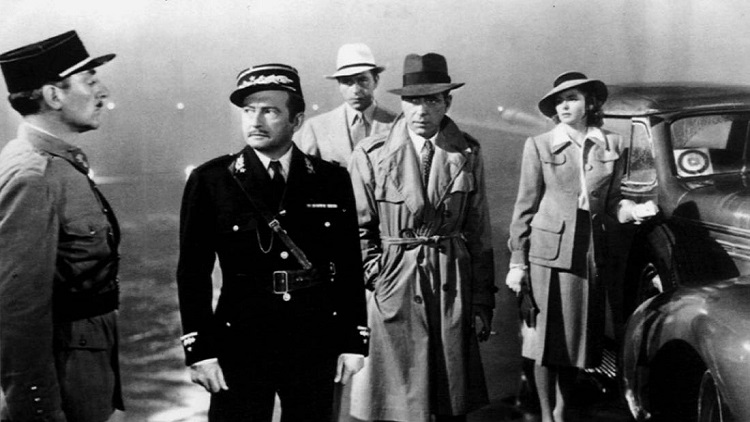 Warner Bros. was so desperate to recreate the magic that it twice paired Bogart with much of the same cast (Passage to Marseille and To Have and Have Not). Woody Allen was so obsessed that he created a play and movie about Casablanca and forever convinced Americans to mangle a key line. (Bogart never said "Play it again, Sam.") A contemporary movie (The Holiday) offers an entire scene dissecting "Here's looking at you, kid." Kid "totally makes the line," Jack Black explains to Kate Winslet. "Here's looking at you, Ilsa," is "not so memorable."

But now I'm gonna ruin it for you. I don't mean to do it, but by the time you've watched Casablanca fifty or a hundred times--and I may have seen it 150 times--things begin to bother you.

Truth to tell, almost nothing about Casablanca makes sense. By rewatch 22 or 122, the non sequiturs begin to pile up. Yet like Plan 9 From Outer Space, you can't look away. THE NAZIS SURE ARE STUPID
The letters of transit--Ugarte murders for them, Rick hides them in Sam's upright piano, Laszlo offers 200,000 francs for them--are a McGuffin. No such travel document existed then or now. We know that. Yet the film leans so far and so hard into them that you eventually begin to ask some logical questions. Why would de Gaulle, an obscure exiled French general in 1941, be signing visas valid in Vichy France? Why would the Nazis honor them? Why would functionaries be so awed by them that they "cannot be questioned?" Those Nazis are incredibly stupid. So stupid that treatises about letters of transit have been produced.

TIMING (AND WORKING CAPITAL) IS EVERYTHING
For a piece of fiction, Casablanca is very specific about dates. We know Rick leaves Paris on the day the Germans marched in. That was June 14, 1940. And we know the film's "present" because Rick drunkenly asks Sam: "If it's December, 1941, in Casablanca, what time is it in New York?" So how did refugee Rick build his "gin joint" into the kind of place "everybody comes to" in just 18 months? Where did he get the money? Angel investors? IPO? A stash of smuggled cash supplied by Rick's pastry chef, who we're told was once the leading banker in Amsterdam? And how did the place build its reputation--"one hears a great deal about Rick in Casablanca," says the oblivious and admiring Laszlo--in so short a time? I mean, who were Rick's PR people?

CAPTAIN RENAULT IS REALLY BAD AT HIS JOB
A strain of Casablanca analysis--yes, that's a thing--posits Rick and Louis Renault were gay. Hence the "beautiful friendship" that begins as the movie ends after Rick dispatched the love of his life and Louis abandoned the job that allowed him to extort sexual favors from vulnerable women. I won't go there. I believe there's a much simpler explanation: Captain Renault isn't just a corrupt cop, he's also really bad at his job. As you recall, Louis explains to Rick he's aware "there are many exit visas sold in this cafe, but we know that you've never sold one. That is the reason we permit you to remain open." Let's say it's true and Renault also is unduly influenced by Rick allowing him to win at roulette. How do we then explain the continued existence of the Blue Parrott and Signor Ferrari? He tells Laszlo and Ilsa that he's "leader of all illegal activities in Casablanca." Doesn't Captain Renault know this tidbit? Why would Ferrari still be allowed to operate? Answer: Louis is a dumb cop. It's outrageous and I shall report it to the angriff!

YOU KEEP USING THAT WORD ...
Speaking of the angriff, the first scene to establish Rick's character is his confrontation with a tuxedoed man seeking entry into the private gambling room. Abdul physically bars him, but the German banker makes a fuss. Rick arrives and informs him that his "cash is good at the bar!" This infuriates the man and he promises to report Rick to "the angriff." But that word does not mean what you think it does. Angriff is not a police force, regulatory agency or government bureau of any kind. It's not a person. In fact, it is not "angriff" at all. The angry German is referring to Der Angriff, an influential Nazi newspaper founded in 1927 by Joseph Goebbels.

LASZLO HAS A DRINKING PROBLEM
Victor Laszlo is an impressive fellow: leader of a cause; concentration camp escapee; husband of Ilsa; impromptu band leader; and publisher of Prague newspapers that reported "the foulest lies"--the 1940s equivalent of "fake news"--about the Nazis. But he's also something else: a lush. Consider how we meet him. He walks into Rick's, is seated at a table and orders Cointreau, the strong, sickly sweet triple sec liqueur. Lured to the bar almost immediately by Berger, the Norwegian with the cool Free French ring, Laszlo orders a Champagne cocktail. He then has another when Captain Renault shoos Berger away. Then he's back to his table for Champagne. All in a matter of minutes. I mean, the guy's got a problem. Let's hope he looked up AA when he reached America.

SAM COULDN'T 'PLAY IT' FOR ANYONE
Dooley Wilson, who played Sam, was a talented singer and bandleader. He was also a contract player at Paramount "loaned out" to Warner Bros. specifically for Casablanca. The one thing he wasn't? A piano player. The piano tunes were dubbed by Elliot Carpenter. He played offstage in view of Wilson so Sam could imitate the hand motions as he sang.

A DAISY BY ANY OTHER NAME
By the time you've watched Casablanca often enough, you start looking for the really obscure stuff. Like how they drink Mumm's Cordon Rouge at La Belle Aurore, the faux Paris boîte where Rick and Ilsa meet the day before the Germans march in. But watch when Rick leans out the window. You'll see very clearly that he's wearing a daisy in his lapel. What guy ever wore a daisy in his lapel? ABOUT THE LISBON FLIGHT
As a traveler, you surely would have wondered why Rick would send Ilsa and Laszlo to Lisbon on an Air France flight. Why would Air France fly from Casablanca to Lisbon in the middle of a war? A couple of years ago, I tracked down the answer and, surprisingly, this one has a basis in reality. When Germany invaded France in 1940, Air France hightailed it to Morocco and flew throughout the war from its temporary hub in ... Casablanca. Unfortunately, the movie's frequent flyer fidelity ends there. The "plane" with the classic Air France seahorse logo was a cardboard model. The "airport" scenes were shot on the Warner Bros. lot. The fog was generated by machine. And the establishing shots of those iconic white airport buildings? Those were filmed at Van Nuys Airport.

Now that I've ruined it for you, watch Casablanca again on TCM at midnight ET on Friday night, August 28. It'll also be available for several weeks after airing on the TCM.com Web site.