Adventures in Vaccineland:
The Good, the Bad, the Lucky
THURSDAY, MARCH 4, 2021 -- Oh, the adventure I've had. One of the great logistical triumphs of my traveling career.

I started at Plattsburgh International, the underserved airport in upstate New York just 22 miles from the Canadian border. Then it was 300 or so miles down the interstate to the Javits Center, the glassy Manhattan convention hall. From there it was up to the Finger Lakes and Skaneateles, the charming little town where I got married. Then 170 miles to the Hudson River and Troy, home of Rensselaer Polytechnic Institute. Then back home and a stop at the firehouse at the edge of town.

Along the way there were reservations at Hyatts, Hiltons, Marriotts and Best Westerns. Meals planned at an incongruously located but much adored Nepalese/Tibetan place, a famed "stretch bread" bakery and even a farm-to-table Korean joint. And it was important to get miles on our Volvo C70, the greatest (and only) Swedish-Italian hardtop convertible ever made.

I didn't do any of this, you understand. Just planned it as I worked my way through the Covid-19 vaccine maze in search of the fastest, closest shots.

Let's hope fifth time's the charm because tomorrow I'm due to get Moderna Shot One at the firehouse four miles from my home. Not bad when you consider my original appointment--at Plattsburgh, a 255-mile one-way drive--was more than a month from now. If all goes right, I'll be fully vaccinated before I was due for the first jab in Plattsburgh--and I'll have driven 16 miles instead of 1,020. There will be no momos, Tibetan or Korean, or cheap, elite-status qualifying hotel nights, but, you know, vaccine right near my house. Score.

I'm no vaccine obsessive, you understand. In fact, I have a slight needle phobia and have never had a flu shot. Besides, haunting vaccine sign-up Web sites several times a day and then booking and planning overnight stays if you got lucky with an appointment isn't particularly edifying.

But I want to travel again. And travel safely. Last year I was convinced testing was the key that would unlock our lives on the road. That didn't happen. In fact, I haven't even had a test yet. But vaccines do seem to be the genuine ticket to travel.

Know how I know that? The Joe Sent Me team has rushed to get them and there are no more obsessive travelers than our contributors. Except for Erica Firpo and Deborah Bernstein, impatiently waiting it out in Europe, they've all been more successful than me, too. Some are done. Others are halfway there. And all of them seem to have had less trouble scoring the shots. 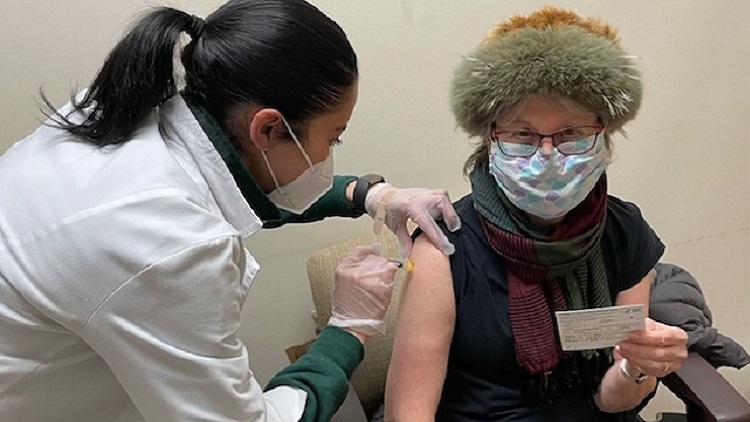 Carol Pucci, based in Seattle, confides that she "just got lucky" with her first Pfizer dose in mid-January. A friend called and tipped her that the local supermarket was taking appointments. She called and snagged a slot and was done. The second shot took a month due to one rescheduled appointment and one snowstorm that paralyzed Seattle. But the day after Valentine's Day, "standing in the grocery aisle next to the pet food and coconut-flavored Easter Peeps, we filled out the paperwork for our final dose. Over and done in less than a minute."

David Danto lives across the country in New Jersey, just 65 miles from the vast, worldwide Joe Sent Me headquarters. Yet we've never met, and, damn, his experience has been smoother than mine. He wrote about his vaccination a month ago. Both his Moderna shots were in his arm by mid-February. His fully vaccinated wife is already back on the road as are some of his friends. "I think they're jumping the gun, but I'm always over-cautious," he explains.

Charlene Baumbich in Minnesota has one shot in and I asked her how it went. "Short version? After a year of staying home, the most exposed-to-Covid thing I've done is stand in a smashed together line for my vaccine. Tall guy in front of me breathing down on me wearing his mask under his nose. Women behind me pushing me into him."

Chris Barnett is half-done, too. He got the Pfizer vaccine and is due for the second in three weeks. His vaccine "was very well-organized, administered in a warehouse near San Francisco's produce district," he explains. "I was cancelled twice two days before, but Sutter Health called to apologize for the mix-up. I arrived 30 minutes early and they took me immediately." 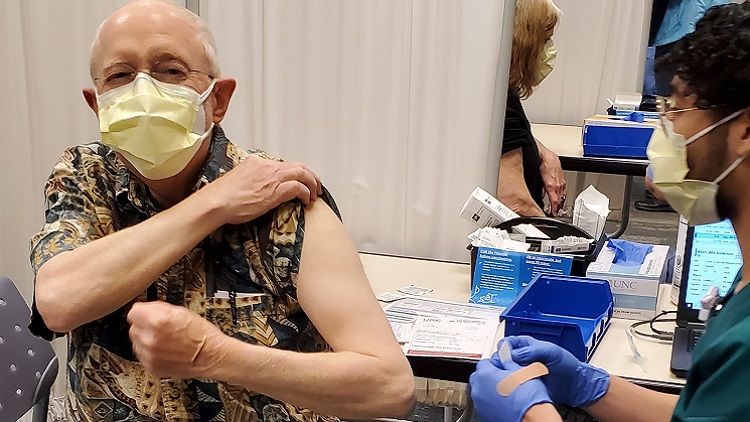 Down in North Carolina, Will Allen was done by mid-February with both Moderna shots and wrote about his first one in January. "UNC Healthcare in Chapel Hill was super-efficient and friendly," he says of shot Number Two. "The entire process (at left) took just 41 minutes entry to exit."

Bob McGarvey got his first shot last month and is due for his second next week. His column this week covers it and how he's thinking about travel now.

Like me, David Rowell dislikes needles, so he'll "try for the Johnson & Johnson single-jab vaccine." But Phil Baker's already gotten his two without incident. Ralph Raffio is driving two hours from his home in Portland to Bangor, Maine, next week. Ralph isn't a fan of Bangor, but tells me he was called by state officials. He didn't even have to search for shots.

Which brings me to my lifelong friend Fred Abatemarco. Except for a Zoom encounter on Christmas Eve, I haven't seen Fred for a year. We hooked up for a meal last March in Manhattan's Chinatown when that seemed like risky business. When I scored the appointment at the Javits Center, I hurriedly called Fred and urged him to sign up before the slots were gone.

He was reluctant. "I'll just wait," I recall him saying. "There's no place to go right now anyway."

I insisted, however, and he agreed to get an appointment, probably more to get me off the phone than anything else. Then appointments "became kind of a game, even a contest," he admits. "It dominated my conversations and my E-mail threads and Zoom calls. 'Did you get it? Are you gonna get it? I got it. My friend got it.' Blah, blah, blah."

And as our lives eternally have diverged in the proverbial yellow wood, Fred's vaccine experience has been far different than mine. He says he scored appointments at sites closer to his Long Island home than the Javits Center--and it ends with his wife receiving a call from their healthcare provider offering a slew of even better options on extremely convenient terms with no fuss, muss or Internet hunting.

"I know this isn't as good as getting bumped up to the front of the bus from coach, but it oddly feels like that," he says.

Column and JoeSentMe.com Copyright © 2021 by Joe Brancatelli. All rights reserved. 2