Lukashenko,
Sky Pirate
THURSDAY, MAY 27, 2021 -- With the Memorial Day weekend upon us, I planned a "soft" column about the F·R·I·E·N·D·S Reunion, which dropped today on a streaming service. I prepared all sorts of tales about how I flip on the TV anywhere in the world and find dubbed versions of The Big Bang Theory or The Simpsons or How I Met Your Mother and other bits of televised American detritus.

But, no-o-o-o-o, as John Belushi once indignantly screamed. I have to write about sky pirates. State-sponsored sky piracy, no less.

Could I be any more confused?

I'll be honest with you. I don't know how to write about sky piracy. Everything I know about this kind of stuff comes from movies like Captain Horatio Hornblower and Errol Flynn swashbucklers. Who does travel piracy today, right?

No one except a Soviet-style, tin-pot dictator of a nothing country that has always been a vassal state of whatever empire Russia was fronting at the moment. I assume many of you can't find Belarus on a map and few of you previously heard of Alexander Lukashenko, the snarling, smarmy, mustachioed villain of today's piece.

Come to think of it, maybe you haven't even heard about the sky piracy in question. So let's start at the very beginning, which, in a totally different kind of movie, they told us was a very good place to start. 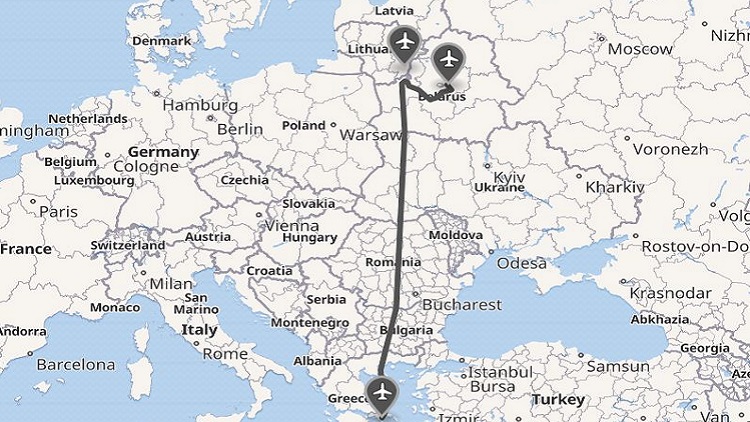 THE INCIDENT
On Sunday (May 23), Ryanair Flight 4978 departed Athens at 7:29 (UTC) en route to Vilnius, Lithuania. As it overflew Belarus at 9:46, it was challenged by a Belarusian MiG-29 fighter. Local air traffic control told the pilot that there was a bomb threat. Just 45 nautical miles from Vilnius--see the flight's routing above--the pilot logically wanted to continue there since it was the nearest airport. But the MiG-29 and air traffic control demanded the aircraft, a Boeing 737 carrying 126 passengers and a crew of six, divert 90 nautical miles to Minsk instead. There may also have been a pair of Russian or Belarusian agents on board. The pilot reluctantly complied--commercial pilots are always wise to comply with fighter jets--and landed in the Belarusian capital at 10:16. Local authorities made a show of searching for explosives, but they actually had a different agenda. They detained two passengers: Roman Protasevich, a 26-year-old dissident Belarusian journalist living in exile in Lithuania, and his girlfriend, a Russian citizen. Two other passengers--apparently those on-board agents--never reboarded the flight, which finally departed Minsk at 17:47. About 40 minutes later, the plane landed in Vilnius. Protasevich and his girlfriend were arrested and bundled off to a Belarusian jail.

THE WEASELLY RYANAIR STATEMENT
As details of the shocking events leaked out on social media and elsewhere, Ryanair issued an equally shocking statement late Sunday. It mentions security checks and that "nothing untoward was found." The statement never admitted to or addressed the removal of two passengers and the disappearance of two others. Ryanair then when silent. Meanwhile, Belarus blithely confirmed the removal and arrest of Protasevich and his girlfriend and said that Lukashenko personally ordered the diversion.

WHAT THE 'LAW' SAYS
The Chicago Convention of 1944 is the universally agreed pact that governs overflights and control of national airspace. It grants wide latitude to a country being overflown and gives nations almost total control of their own airspace. Lukashenko's piracy may be disgusting and dangerous for all travelers everywhere, but it doesn't, technically, break the letter of Chicago Convention.

THE FURIOUS RESPONSE
The world community immediately condemned Belarus' piracy and did it with vivid and unvarnished language. (Only Russia, Lukashenko's uneasy patron, has lined up with Belarus.) European authorities immediately ordered its airlines not to overfly Belarus and barred the Belarusian flag carrier, Belavia, from European airports. By Belavia's own admission, it was barred from flying to Lithuania on Monday (May 24). By Tuesday, the United Kingdom, France and Ukraine had pulled Belavia's flight rights. On Wednesday, Finland, the Czech Republic, Latvia and Sweden banned Belavia. This morning, Belavia reported that it had been forced to cancel service to seven more nations: Italy, Netherlands, Germany, Poland, Austria, Belgium and Spain. Belavia also ended flights to Kaliningrad, a Russian-controlled city that is sandwiched between Poland and Lithuania. That's because there is no way to reach Kaliningrad from Minsk without overflying European air space now closed to Belavia. As of Friday morning Europe time, Belavia also had been forced to abandon flights to Estonia. For its part, Ryanair on Monday issued a brief "updated" statement calling Belarus' moves "unlawful actions" and "aviation piracy." It then went silent again.

THE PUSHBACK
Already under sanctions because he ran a rigged election in 2020, Lukashenko has ludicrously claimed the bomb threat was real. He even went so far as to say the threat came from Hamas. (Hamas promptly denied it.) Belarusian authorities claim the Ryanair pilot requested a diversion to Minsk. (Yet a partial transcript of the pilot's conversation with air traffic control released by Belarus clearly shows the pilot was told to divert.) Lukashenko personally has defended his act of piracy because he claims the self-exiled journalist is an enemy of the state. Protasevich was shown making a "confession," but the video bore all the markings of a coerced hostage tape. His girlfriend hasn't been heard from--nor have those other two passengers who disappeared when the plane was forced to land in Minsk. More importantly, however, Russia has begun to harass airlines adjusting their flight routing to avoid Belarusian air space. Austrian Airlines and Air France have cancelled some flights to Moscow this week because they won't overfly Belarus and Russia wouldn't approve alternate routings.

THE BOTTOM LINE
As Will Allen noted in his blog post this week, Lukashenko's air piracy affects anyone who gets on a plane and leaves U.S. or Canadian airspace. Unless you are one of those people who obsessively watch the in-flight moving maps when you fly internationally, do you even know what countries you overfly? This is stuff we rarely had to worry about before. And yet the third-rate dictator Lukashenko--he was in Moscow today consulting with Russian strongman Vladimir Putin--now has thrown our travel lives into chaos. And don't think Lukasheno isn't capable of far worse. In 1995, Belarus machine-gunned a racing balloon and killed its two passengers.

Stay tuned, folks, this is going to get uglier before it gets better. And we won't be able to hash this one out among friends as we lounge on a comfy sofa at a cutesy coffeehouse. That's TV stuff. This is real life.