Today's Lesson: Insanity
And the Art of Airlines
THURSDAY, OCTOBER 7, 2021 -- This is a tough admission for a guy who's been flying on and writing about business travel since the 1980s: I have no clue about what airlines are thinking.

Everything they do seems dumb, anti-competitive and, all too often, passenger-repugnant. In other words, it's just another week of life on the road. Share it with me, won't you?

OPEN CITY AND CLOSED MINDS
There are not many "open cities" when it comes to major metropolitan areas and airline service. Fast-growing Austin and the Raleigh-Durham/Research Triangle area come to mind. Los Angeles and the sprawling Southern California market certainly seems able to soak up and support new carriers and service no matter which airline claims it as a hub. But I think Boston/Logan, emotional and logistical heart of New England, has been the best example of an airport where multiple carriers compete for supremacy.

Of course, American Airlines, which hates competing, and JetBlue Airways, which wouldn't exist save for a political slot carve-out 20 years ago at New York/Kennedy, want no open market. The prosaically named Northeast Alliance was specifically designed to choke competition at JFK and Boston. It was approved by the Transportation Department in the dying days of the Trump Administration, but, last month, was challenged by the Biden Administration's Justice Department. 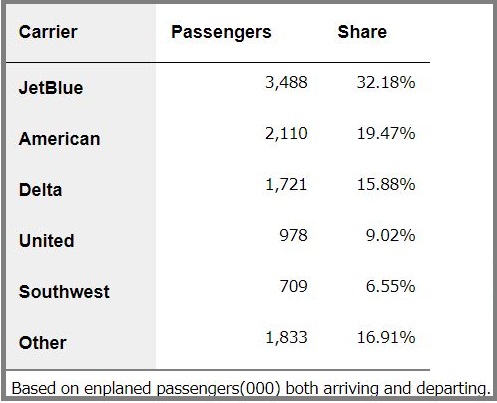 A look at DOT statistics for Logan (left) explains why DOJ is incensed. All by its lonesome, JetBlue controls more than 32% of the Boston market. All by itself, American handles about 20%. What earthly reason is there for the government to allow the top two players in a market to combine and crush competition? If American and JetBlue are more than half the Logan market while competing on a level playing field, why give them legal leave to skew the marketplace with an alliance?

DOJ will find the same thing at JFK. Although Delta Air Lines is a strong second (33.5%) and dominates international flights, JetBlue is the JFK market leader with just north of 40% of the traffic. American and its commuter carriers are third and control about 20%. So again, the question: Why should two airlines that already control 60% of an airport's traffic be permitted to form an alliance against its competitors?

Delta, the distant third in the Boston/New England market, naturally is not above making mischief while AA and JetBlue defend the indefensible. This week Delta announced it would launch nonstop flights next year from Boston to both Tel Aviv and Athens, two routes American announced from JFK earlier this year. Delta is also bulking up domestically with new nonstops from Boston to Baltimore, Denver and San Diego.

Now some talking-head analysts say Delta's move proves the JetBlue-American alliance isn't hurting competition. It's a facile argument. If the New England and New York markets actually can support two new carriers flying to Tel Aviv or Athens, why hasn't even one of them tried in the past?

No, frequent flyers, this is not competition. It's a Potemkin Village where two carriers try to corner the market and a third hopes to inflict as much financial pain as possible while the legal process plays out. Stay tuned--and don't be fooled.

EGO AND REVENGE AT WOEBEGONE AIR INDIA
The Tata Group of India is so huge--US$103 billion in sales, perhaps 800,000 employees worldwide--that its size is expressed as a percentage of the country's GDP. (It's about 3%.) Founded more than 150 years ago, it owns famed Indian brands (Taj Hotels), global automotive icons (Jaguar and Land Rover), everyday standards (Tetley tea and Eight O'Clock coffee) and has its corporate fingers in products and companies as diverse as Starbucks, SkyTV, AIG Insurance, steel mills, research labs, chemicals, power plants and construction equipment. And, just for fun, it owns Bombay Brasserie, one of London's best and most storied Indian restaurants.

So what in the name of Krishna is Tata doing buying Air India, a woebegone carrier that hasn't made money in years, is a global laughing stock and an increasingly impotent force in its home market? Why spend $2.4 billion for a hobbled airline that's burned through nearly $15 billion in subsidies since 2009 and is saddled with $8 billion in debt?

It was Tata that created the company that became Air India in 1932. In fact, the inaugural flight of what was then called Tata Air was piloted by J.R.D. Tata, one of the firm's legendary chairmen. He renamed it Air India in 1946 in anticipation of the country's independence and nurtured it until it was nationalized in 1953. It's been almost a matter of corporate faith that Tata would one day regain control of the airline. Now it's come true since India's current prime minister, Narendra Modi, has been desperate to unload money-losing state enterprises.

But with Air India back in Tata hands, what will happen to the cash-sucking carrier that seems to have few assets save for valuable slots at London's Heathrow Airport and about half of India's international routes?

WATCH ME BREAK THE LAW
A convoluted case pitting Southwest Airlines against Kiwi.com, an obscure software firm, has yielded a startling result: Southwest has won a preliminary injunction that bars Kiwi from "publishing Southwest flight or fare information" or "accessing and using Southwest's Website."

In other words, Southwest has convinced a federal judge that it can control who can access its public site and who can publish information about Southwest's fares and flights. "Admittedly," as Ratan Tata might say, the Fifth Circuit, which granted Southwest's request, is one of the nation's most reactionary courts. But still ...

Consider this innocuous nugget: Southwest Airlines Flight 5972 flies from Dallas/Love to Phoenix. It departs at 6:15am and arrives at 6:55am local time. On Thursday, October 14, prices start at $255 one-way. I found this information today by surfing Southwest.com.

Technically, I have just committed an act that Southwest Airlines has convinced a judge to consider a violation of an injunction.

A BAD AIRLINE BY ANY OTHER NAME
As I've mentioned, Alitalia flies into history next Thursday and its death will not be mourned by many.

Effective next Friday, October 15, the Italian government has propped up a new flag carrier tentatively called ITA, a not-particularly-clever acronym for Italia Trasporto Aereo. ITA was, um, slow to apply for rights to fly to the United States, but that part of the tale has been resolved. Armed with U.S. approval, ITA this week announced it will start flying between JFK and Rome on November 4. In March, it will launch Rome service from Boston and Miami and add JFK-Milan/Malpensa flights, too. In the summer, ITA promises a nonstop route between LAX and Rome.

All these routes are now being flown by Alitalia. In fact, ITA has adopted Alitalia's computer code (AZ) and numbered its flights exactly as Alitalia has been doing. If you want to book a ticket on ITA and surf to its site, you'll be serviced by the Alitalia booking engine jury-rigged with ITA's logo. In fact, virtually everything about ITAspa.com--photography, typefaces, promotional patter--is cribbed from Alitalia's site.

But don't call ITA by the Alitalia name. You literally cannot. On Monday, no one bid the required 290 million euros to buy the Alitalia brand out of bankruptcy. Not even ITA entered a bid. Another round of bidding in the days ahead may or may not decide the value of the Alitalia name. Or the name may die.

Still, by any other name, ITA seems on course to hemorrhage as much cash as Alitalia and none of this is lost on Italian journalists, of course. As the wags at Corriere della Sera note, the new ITA is expected to lose something close to two million euro a day from its October 15 launch to December 31.

"First mission, perhaps the main one," the paper notes wryly, "is not to lose more money than expected."