United Airlines has self-righteously boasted about its August vaccine mandate, 98% staff vaccination rate and the fact it only had to "terminate" around 300 recalcitrant employees. But what United does not want you to remember is that half its flights operate as United Express and the regional carriers running them have no vaccine mandates.

On his third-quarter earnings call yesterday, United boss Scott Kirby said "customers can book with confidence on United … but if you're booking on an airline that doesn't have a vaccine requirement ... caveat emptor." One more time, Skippy: Half your flights operate with no vaccine mandate.

American Airlines chief executive Doug Parker, who used to be Kirby's boss, offers a buffet of excuses about AA's vaccine mandate. He said the "vast majority" of American workers already had the shots and almost all of the rest should receive the vaccine or valid waivers by AA's November 24 deadline. Those that don't will be terminated, he claimed. But he also claimed "we'll continue to work with" recalcitrant workers after the deadline. Then he promised "no one's going to leave American because of this." Will you have the ranch dressing or Balsamic vinaigrette with that word salad?

Meanwhile, Southwest Airlines said today that its Columbus Day Weekend operational meltdown--you remember, the phony anti-vax sick-out--cost about $75 million spread out over cancellations, passenger refunds and "good will" discount vouchers sent to many affected flyers. Southwest executives had no apologies, refunds or discount vouchers for the rest of us who now have to listen to right-wing grifters prattle on about the Southwest "freedom flu." 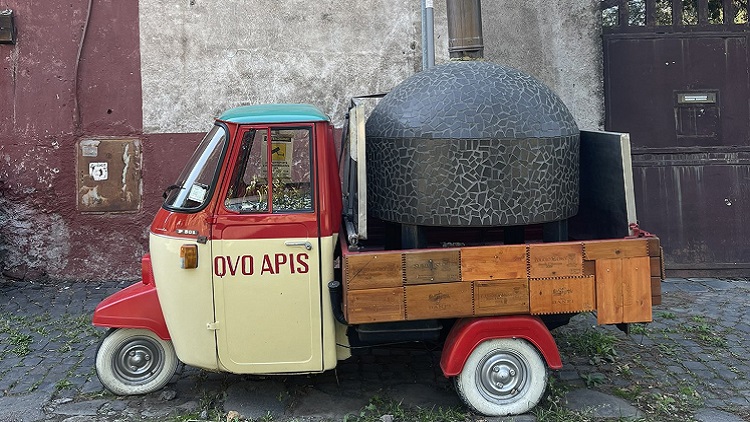 Our good friend Erica Firpo snapped this mobile pizza oven on Via Appia Antica, one of Rome's oldest highways. The ancient Roman system of roads, aqueducts and pizza delivery inspire awe to this day. ...

Speaking of old, Neil Young dropped a crystal-clear "official bootleg" edition of a much-bootlegged 1970 concert at Carnegie Hall. It includes a haunting pre-release rendition of "Old Man." He also reproduces the song list taped to his guitar. It was scribbled on note paper bearing the logo of the old Gorham Hotel a few blocks from Carnegie Hall.

Reduce your travel expectations. A water-main snafu in Charlotte on Monday cut supply at American Airlines' Charlotte/Douglas hub, too. There was no water in the bathrooms for hours. Flight attendants on arriving American flights urged passengers to use the lavs before deplaning. Hours later, the airport triumphantly tweeted: "Water has returned to the restrooms."

Fair fare warning: If you expect to travel during the Thanksgiving or end-of-year holidays, book now because prices will not be going anywhere but up. The Transportation Department says fares in the second quarter jumped 12.6% from the first quarter, 10.4% from the second quarter of 2020 and 18.2% from the last year's third quarter. Throw in the spiking price of jet fuel and, well ...

Fair operations warning: There's no reason not to think at least one major airline will melt down over the holidays. Last year's holidays featured Delta's collapse. Southwest has had two biggies this year, including the Columbus Day Weekend fiasco. Best advice: Book nonstops wherever possible. Have back-up plans. Also know what your airport hotel options are.

William Shatner went to space on a Blue Origin aircraft last week. So that means Galaxy Quest was real, right?

Disney says it has delayed the latest Indiana Jones sequel by a year and it won't premiere until 2023. The star, Harrison Ford, is already 79. Working title: Indiana Jones and the Enlarged Prostate.

A bit of normality has returned to the airline world. JFK-LAX is again the busiest route in the country. There are more than 250,000 available seats on the run this month. Runner up? That's a surprise. It's Denver-Phoenix. Denver routes pop up twice more (Chicago/O'Hare and Las Vegas) in this month's top ten.

By the way, the domestic/international recovery gap remains gigantic. Nearly 60 million people flew domestically in August, according to the Transportation Department. That's down a relatively modest 17.5% from August, 2019. International traffic, however, was off 42.7%. That'll change when the United States opens borders next month, but it's a lot of ground to make up.

I'm ridiculously pumped for the Peter Jackson Get Back project, which boils down 50+ hours of mostly never-before-seen 1969 video from The Beatles' troubled Let It Be sessions. The three-episode, six-hour documentary premieres Thanksgiving Day on Disney+. The official trailer and the teaser reel released last Christmas both look intriguing.

We know Let It Be has long been misconstrued as the "break-up" album, which is silly since The Beatles went back into the studio and recorded Abbey Road later. Here is my pre-viewing executive summary. Paul: The public expects something special from "the lads," so let's create a spectacle. John: I'm getting laid every day now and have a big stash of drugs, so whatever Paul says. George: Stop treating me like the junior partner or I'll take my Rickenbacker and go home. Ringo: I'm going for a cup of tea, so let me know when you want me to lay down the beat.

Capital One opens its first airport lounge at Dallas/Fort Worth next month. The 10,000-square-foot space near Gate 22 in Terminal D will have a grab-and-go cooler of snacks not far from the front door. There'll be a four-sided buffet layout near the center of the club. It even has an exercise and yoga area (but weirdly, just one shower). What it doesn't have: an entry policy. We still don't know how you gain entry or how much you pay.

Meanwhile, United Airlines today opened a Polaris lounge at its Washington/Dulles hub. Which is odd, since United hasn't bothered to reopen existing Polaris international business class lounges at Newark, Chicago/O'Hare, Los Angeles, San Francisco and Houston. Because owning your hubs and abusing your best customers means never having to say you're sorry.

FlixBus, the inter-city bus service founded in Germany, says that it's buying Greyhound in a deal worth $172 million. No truth to the rumor that Greyhound will be rebranded German Shepherd.

EasyJet, the low-fare/high-fee European carrier, has slapped its name on an existing common-use club lounge at London's Gatwick Airport. No truth to the rumor that competitor Ryanair also will open an airport club to fulfill chief executive Michael O'Leary's long-held goal of charging airline passengers to use a restroom.