Two Women and Two
Paths in Rock Music
SUNDAY, OCTOBER 23, 1977 -- It is impossible to discuss Karla Bonoff's new Columbia album without paying some sort of homage to the Linda Ronstadt connection. The two are inextricably tied.

Called simply Karla Bonoff, the debut album is produced by Kenny Edwards, one of the founders of the Stone Poneys, the 1960s band with which Linda Ronstadt had her first hit single. No less than seven of the musicians who played last year on Ronstadt's Hasten Down The Wind also perform on the new Bonoff disc. And Ronstadt herself contributes background vocals on at least two of the selections on the Bonoff album. 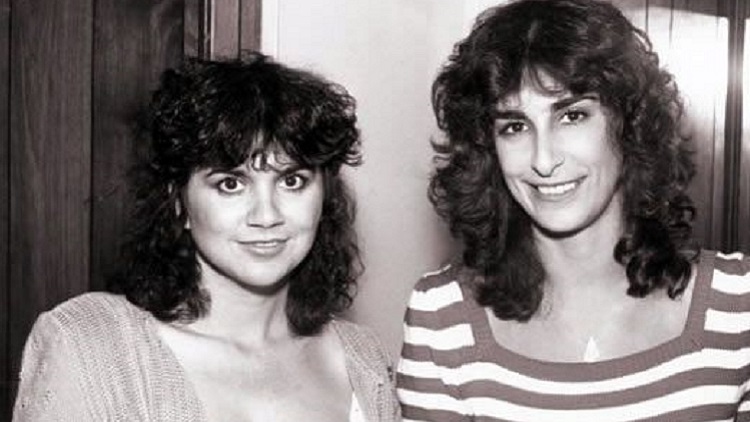 Most of all, however, Karla Bonoff (right) seems indelibly tied to Linda Ronstadt (left) because she helped Ronstadt's act "grow up."

When Linda Ronstadt and the Stone Poneys burst on the scene a decade ago, it was with the coyly suggestive "Different Drum," a single written by Michael Nesmith, the actual musician among The Monkees. The song, to say the least, was just a little fatuous: I ain't saying you ain't pretty/All I'm saying's I'm not ready/For any person, place or thing/Trying to pull the reins in on me

Nevertheless Ronstadt, extremely attractive and explosively sexy, had absolutely no problem parlaying that one tune into a reputation for avant garde song stylings. Performing as she often did with no shoes, no bra and tight, skimpy of costumes, she quickly became every rock 'n' roller's fantasy of the "hot babe."

But that kind of sexual greasy kid's stuff can only advance a recording artist so far and Ronstadt's career was mired in the obscure mediocrity of "Different Drum" for the better part of a decade. Then producer Peter Asher fashioned an abrupt about-face for Ronstadt's image in 1974 with the release of Heart Like A Wheel. Ronstadt was suddenly presented as the gorgeous--but forsaken--true lover rather than the footloose sexual adventurer. Singles such as "You're No Good" and her cover of the Everly Brothers' "When Will I Be Loved?" were instant smashes.

Her subsequent collaboration with Asher, 1975's Prisoner In Disguise, reinforced her broken-hearted waif posture. But it wasn't until last year's Hasten Down The Wind that Ronstadt's throaty vocals and sexy stage presence were augmented by truly outstanding material.

And that's where we meet Karla Bonoff. Besides contributing background vocals, Hasten Down the Wind contained three of her songs, all of them subtle, all of them poignant and all of them perfectly suited to Ronstadt's new image as folk/rock's premiere torch song stylist. Perhaps the best song on the album was Bonoff's spectacularly effective "Someone To Lay Down Beside Me," a painful ballad about loneliness and where it leads:

Bonoff's pragmatic lyric line and Ronstadt's husky rendition of the song made the decade-old "Different Drum" sound like a sordid fantasy from ages ago. Critics everywhere agreed Linda Ronstadt had finally become a singer with which to be reckoned. From there it was a short hop to a barrelful of Grammys and last month's Rock Music Award as top female vocalist of the year.

With all this said about Karla Bonoff's massive contributions to the growing Ronstadt legend, it is unfortunate that her own first album is such a disappointing exercise.

It was only natural to expect Bonoff's solo debut to be infused with healthy dollops of the same feelings and emotions she brought to Ronstadt's work. But even though some of the songs are literally the same, the passion is gone. Every cut on the album suffers from an acute and bewildering lack of enthusiasm.

Of the ten songs on Karla Bonoff, eight are original compositions, five of which have been previously recorded by other artists. Bonoff's "covers" of the three recorded by Ronstadt--including, of course, "Someone To Lay Down Beside Me"--are shocking in their lack of emotional power. She runs through these three very sad songs as if she's singing about Hamburger Helper. Perhaps the Ronstadt versions are more interesting because of the lingering effects of her old "Different Drum" image, but the Bonoff cuts here are simply bland and would be inferior by any comparison.

Another potentially catchy Bonoff tune, "Home," already covered this year by Bonnie Raitt, also gets a flat, unemotional read. And then there is "Isn't It Always Love," a song that is sure to be a hit sometime, some day for someone. It is more ironic and sardonic than Bonoff's more successful songs. It should be a standout, but, once again, Bonoff's rendition is unexciting. Karen Alexander covered the tune on her 1975 album--not coincidentally named Isn't It Always Love--and it probably should have been a hit, but never charted.

"I Can't Hold On" is arguably the best cut on the ten. What's most surprising about this Bonoff number is its dissimilarity to the other songs she has written. It easily could have been included on Fleetwood Mac's monstrously successful Rumours because both its lyrical content and melody are dead ringers for that album's sound. Still, the Bonoff rendition lacks any real fire--or even any understanding of this West Coast rock style typified by Fleetwood Mac, the Eagles or Ronstadt--and undoubtedly would have been in better hands on "Rumours."

Despite the disappointing nature of this debut, however, don't dismiss Karla Bonoff. At 26, she's already a fine songwriter with a unique feel for tunes that come from the distaff side, something always in short supply in the testosterone-fueled music industry. And if her music is better handled by other recording artists, that is certainly no disgrace.

A 2020 UPDATE
Ronstadt finished the 1970s as the industry's highest-paid female act and, of course, its biggest hitmaker. In the 1980s, she turned her attention to the Great American Songbook and was one of the first rockers to sing standards. And I'd be remiss if I ignored her 1992 star turn in a classic episode of the Simpsons called "Mr. Plow." Unfortunately, illness cut her career short. Her last full-fledged album was in 2004, her last live concert was in 2009 and she retired in 2011. A well-received documentary on her life was released last year.

Karla Bonoff eventually recorded four albums, but none sold well and they were often savaged--"MOR [middle of the road] schlock," bitched Rolling Stone--for the same passivity I noted in this review. Oddly, she didn't write her only Top 40 hit ("Personally") as a recording artist. She continues to tour, however. Her songwriting career has been more substantial and she's written hits for several artists and motion-picture soundtracks.

I was right about the song "Isn't It Always Love." It's been covered by a wide range of artists over the years and became a Top 10 hit in 1979 for country artist Lynn Anderson.

The 1977 column originally appeared in The Washington Star.

Column and JoeSentMe.com Copyright © 1977- 2020 by Joe Brancatelli. All rights reserved.